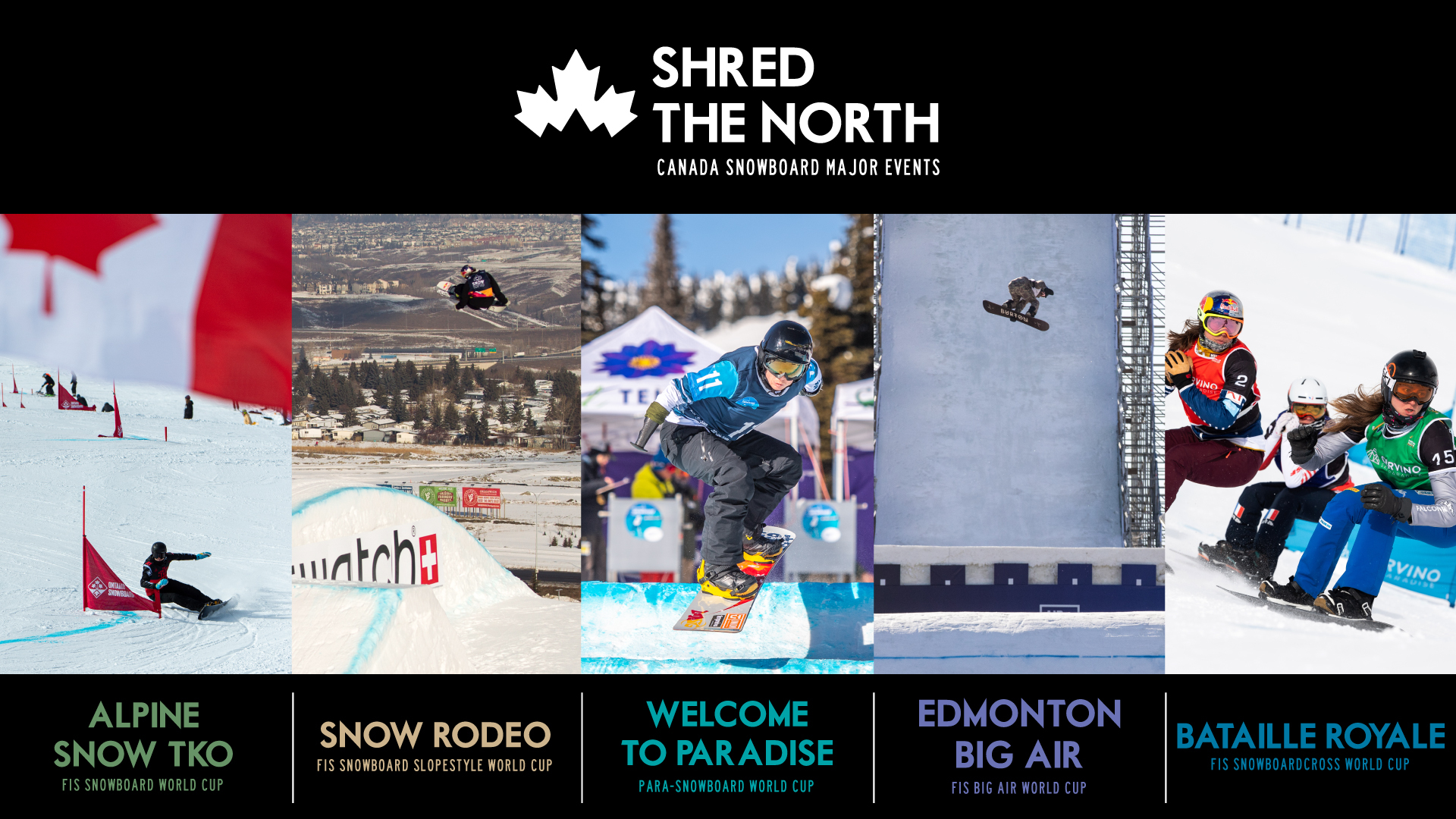 “Canada Snowboard has big plans with its major event series; Shred the North. These events are the pinnacle of the competition pathway and therefore need to be World Leading events. The Shred the North Series will host the World’s best riders on the World’s best courses, built by the World’s Best designers at some of the World’s Best resorts. Canada is home to many of snowboarding’s superstars and we are blessed with great mountains, cold temperatures, and a thriving snowboard culture which we hope to showcase through the Shred the North Series. Snowboarding is one of the best lifestyle sports the world has to offer. It is primarily fun and creative which means the events should also be fun and creative. Shred the North means Canadian riders have the whole package in Canada from grassroots to elite and that will hopefully inspire kids to go out and grab anything that resembles a board and go and slide on some snow.” Dustin Heise, Canada Snowboard Executive Director.

The Shred the North Series kicks off in Calgary, Alberta with the Snow Rodeo FIS Snowboard Slopestyle World Cup presented by Swatch and Toyota. Due to the Canadian Olympic Team Selections needing to be completed by early January the Snow Rodeo has been brought forward to the Holiday Season providing our team with a great opportunity to gain valuable pre-Olympic competition preparation and results. This also provides the unique win for the fans to watch Canada’s best park shredders in action through the Holiday Season with the finals on New Year’s Day. The 2021 Snow Rodeo will be run in a longer additional day format with Qualifications, Semis and Finals. The course will feature the Toyota Tundra Best Trick element with additional prizing allocated to just that feature and SLS judged results for tech and peer voting of style incorporating all rounds of competition. Halfpipe will make its return at The Snow Rodeo in 2023.

“To me Style is the most important part of snowboarding. To be truly the best you need to be able to do everything with style. Snowboarding is becoming so technical, where the more you spin the higher you rank, which often puts the style element second to the technical.  Style is also hard to judge unless you yourself are an artist. This to me is why the riders need to be involved with the judgement of style. They are the ones evolving our sport and by doing so they are the only people qualified to truly judge their peers. I look forward to seeing what they come up with on this new format element of the Snow Rodeo. I hope it will be a valued addition.” Rich Hegarty Canada Snowboard Event Specialist.

Second stop of the Shred the North Series will see the launch of Welcome to Paradise Presented by Swatch and Toyota, the evolution of the Para-snowboard World Cup event at Big White Ski Resort, B.C. Welcome to Paradise is an IPC sanctioned event and guaranteed to be epic. Big White Ski Resort has been hosting this event for many years and know how to build a great course and put on a spectacular event and great hosting. Head to Big White in February to catch the World’s Best para snowboarders in action. “We are thrilled to once again welcome back the world’s Para-snowboard Cross athletes to Big White Ski Resort.” Commented Michael J. Ballingall senior vice president Big White Ski Resort. “Over the years we have grown to know these athletes and their passion for the sport and life and we do our best to make sure we produce a course that they can excel in and get them ready for the world stage.”

Third stop is Bataille Royale Presented by Swatch and Toyota. A Snowboardcross (SBX) with an individual World Cup as well as a team event World Cup over two days in a high-speed battle where only one can be the champion for each. Hosted at Mont-Sant-Anne, Quebec; Bataille Royale is planned to be an annual event at home in the Quebec City area. Never a disappointment, the Speed SBX format is the most physical snowboarding discipline where crashes are expected and only the fastest and most fearless cross the line first. Short and fast makes it easy to watch live. Come and support Canada’s top SBX riders in action fresh off the plane from the Beijing Olympics.

New to the future calendar is the Edmonton City Big Air. A scaffold spectacular planned for fall 2022 under the Northern Lights in the 2026 FIFA World Cup Soccer venue of the Commonwealth Stadium. Between just the Canadians in the line-up there will be both the men’s and women’s current World Champions in Big Air, Mark McMorris and Laurie Blouin. Mark, the most decorated snowboarder in history has two Olympic medals, 20 X Games medals, 4 US Open titles and the title from Natural Selection 2021, Jackson Hole in his wardrobe and Laurie, an Olympic Silver medalist and 3 X Games medals.  Also, in the lineup are reigning Olympic Champion and 6x X Games medalist, Seb Toutant, 13x X Games medalist and current Silver Olympic medalist, Max Parrot, 2x X Games medalist, Darcy Sharpe plus a bucket load of the next generation eager to build their own legacies. The Big Air World Cup is always an insane event and holding it this far North will let Canada showcase the best of the best in a major winter action sports mad city of Edmonton. Expect it to be loud and full of surprises.

The Alpine Snow TKO presented by Toyota will be making its return at Blue Mountain, Ontario. The World Cup PGS was a great success there in 2019 on a pitch seemingly made for Alpine racing. Blue Mountain Resort is a great host for the Alpine Snow TKO with bars and restaurants lining the plaza right at the base of the PGS course, making spectating a pleasure especially with the simple to follow format. Head-to-head PGS racing where the first across the line progresses to the next round makes each battle of the final rounds entertaining for all. The action flows fluidly from the plaza to après to the nightlife catching many by surprise when they find themselves in the bar still in their boots with their boards at the door. A definite don’t miss.

For any event regarding the Shred the North Series please email: zrqvn@pnanqnfabjobneq.pn