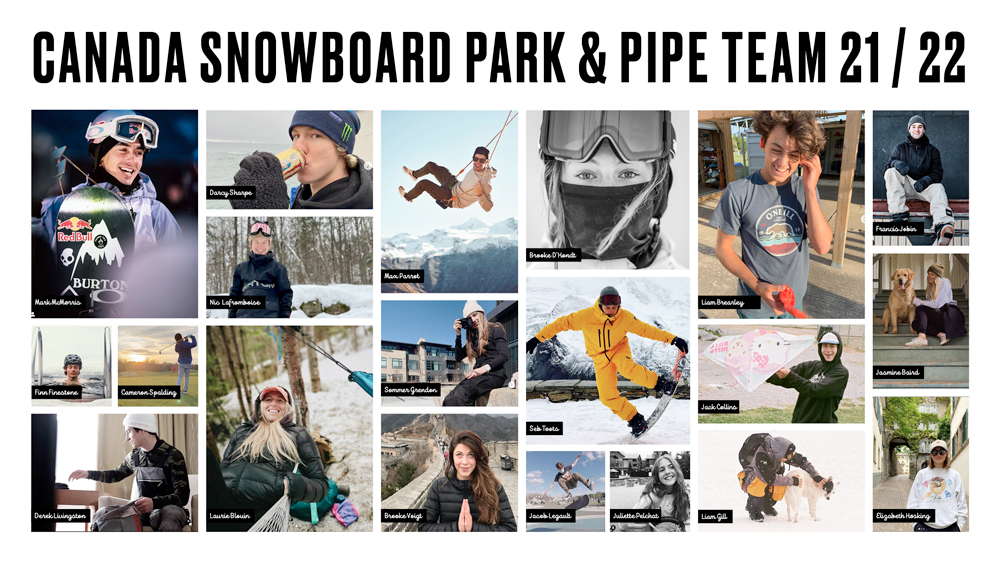 The National team sets sights on Olympic Qualification attending the FIS World Cups and World Championships along with Elite tour events, in the uncertain season ahead….

Vancouver, BC – Canada Snowboard, in accordance with its 2021/2022 Freestyle selection protocols, is pleased to announce the 2021/2022 Canadian National Park and Pipe Snowboarding Team.  Consisting of Slopestyle, Big Air, and Halfpipe, 7 women and 13 men will represent Canada across the National, and NextGen teams.

The 2021/22 Canadian Park and Pipe teams will focus on attending the World Cup events in hopes of securing Olympic Quota and qualifying to attend the Beijing Olympics. The National Teams will also attend Elite level WSPL events to compete against the world’s best on the biggest stages.

The NextGen team showed up this past season on the International stage, Liam Brearley alone achieved 2nd at the World Cup in Silvaplana. His dominance and consistency at World Cup events and hard work over the season have led him to progress onto the National Team.
Canada has one of the strongest Park & Pipe snowboarding teams with a culture of progression and big results when it counts. This year's team selections include...

The Slopestyle program is moving from a larger 3-tiered system to a slimmed-down 1-tier system (One team). Within the new one team structure, there will still be both NextGen and National Team identified riders. With the current snowboarders in Canada this team will be smaller but much more focused on Canada’s top talent, with 3 on snow coaches, and 2 off snow coaches. The purpose of restructuring is to create and do more with the available resources and create a stronger development pathway for the very best in Canada. This will ensure that athletes are able to progress move effectively from the NextGen level to the National team.
Descriptions of the teams are below with the nominated team members.

Both the NextGen and National team riders are the Top-tier of the Canadian System, riders at this level are progressing towards World Cup Podiums (NG) or invited and riding at the Elite level events (Dew Tour, X-Games, US Open, etc) (NT), training for the team will be consisting of the largest jumps, rails, and slopestyle courses in the world. Progression and results are among the best in the world.

The Top-tier of the Canadian System, riders at this level are invited and riding at Major events (World Cups, World Championships, X-Games, Dew Tour, etc.) consisting of the best competitors and pipes in the world. Progression and results are among the best in the world.
A full-Time National team program including the DTE with an off-snow coach in Calgary is made available.

Attached below is the Canada Snowboard AAP Nomination list

A notice of appeal, as described in the Appeals Policy, must be sent directly to:
Dustin Heise
Executive Director
Canada Snowboard
qhfgva@pnanqnfabjobneq.pn