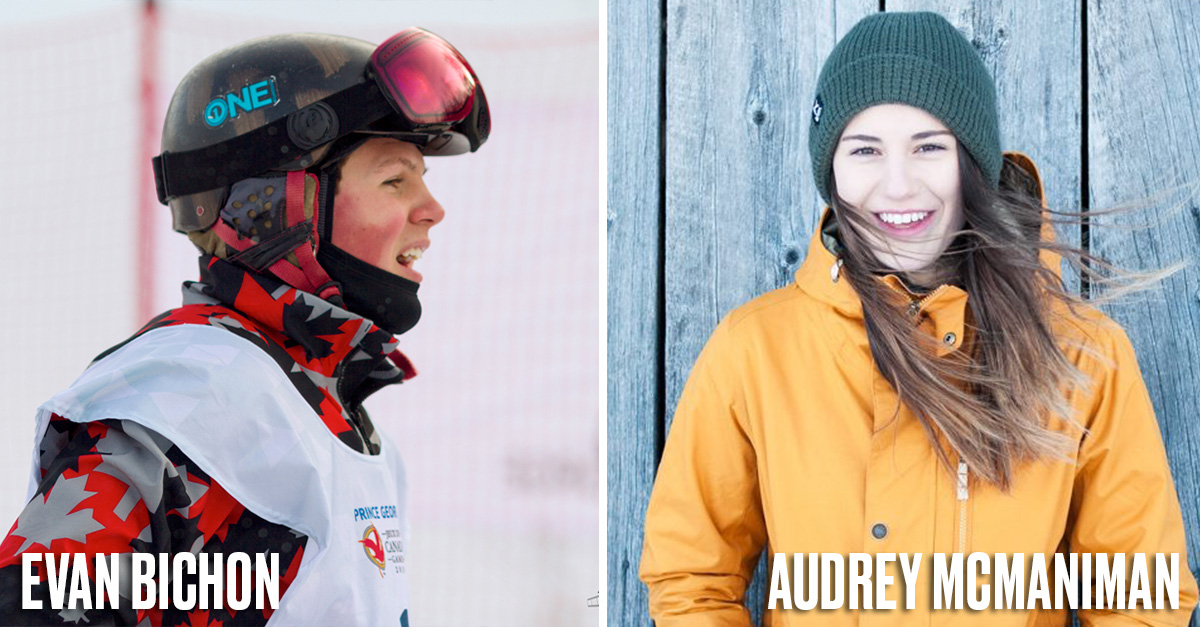 Audrey McManiman (Québec, QC) and Evan Bichon (North Vancouver, BC) have been named as the recipients of the 2017/2018 Neil Daffern Award for Excellence. The Award, named in honour of the legacy of Neil Daffern, aims to recognize and provide financial assistance to Canadian riders who have the potential to be among the World’s best in their respective disciplines. Although typically awarded at the end of the season, Neil’s family has decided to give the award earlier on the occasion of this big season.

A pioneer in snowboarding, Neil Daffern co-designed the first twin-tip snowboard under the BARFOOT name, which paved the for the progression of freestyle snowboarding as we know it today.

A member of the Canadian Snowboardcross Development Team, Audrey McManiman isn’t one to shy away from a good challenge. She finished the 2016/2017 season with 7 podium finishes, notably 4 of them being victories, taking the NorAm Overall Championship title following her 1st place finish in Mont Tremblant, QC. She is determined to defend her NorAm Overall Championship title in the 2017/2018 season, and to improve her rankings on the World Cup tour.

On receiving the award, McManiman said: “I feel very lucky and grateful to receive the Neil Daffern Award for Excellence knowing that this award has been given to amazing athletes in the past and that I am not the only Canadian snowboarder who deserves it. It gives me the opportunity to push myself on the world cup circuit and worry less about financial needs during the season.”

Fellow teammate Evan Bichon’s accomplishments in recent years include 1st place at the 2015 Canada Winter Games, 4th place at the 2016 Youth Winter Olympics Game in Lillehammer, Norway, 5th place at the 2017 Sports Experts Speed Nation Nationals in the senior category in 2017 and 1st place in the junior category of the same event. Evan has given himself the goal of winning the overall Nor-Am title in 2018, as well as improving his standing on the World Cup circuit with the aim of landing a spot on the Canadian National Team.

When asked what receiving the award meant for him, Evan stated: “Snowboarding has been my passion for as long as I can remember, and being able to pursue it full time means the world to me. Funding from the Neil Daffern Award will allow me to fully pursue my goals this season and help with my path towards qualifying for an Olympic Games in the future. I am very honoured to receive this award and I hope that in chasing my dreams I may inspire others to chase theirs.”

Bronze Finish For O’Dine And Bergermann In Turkey