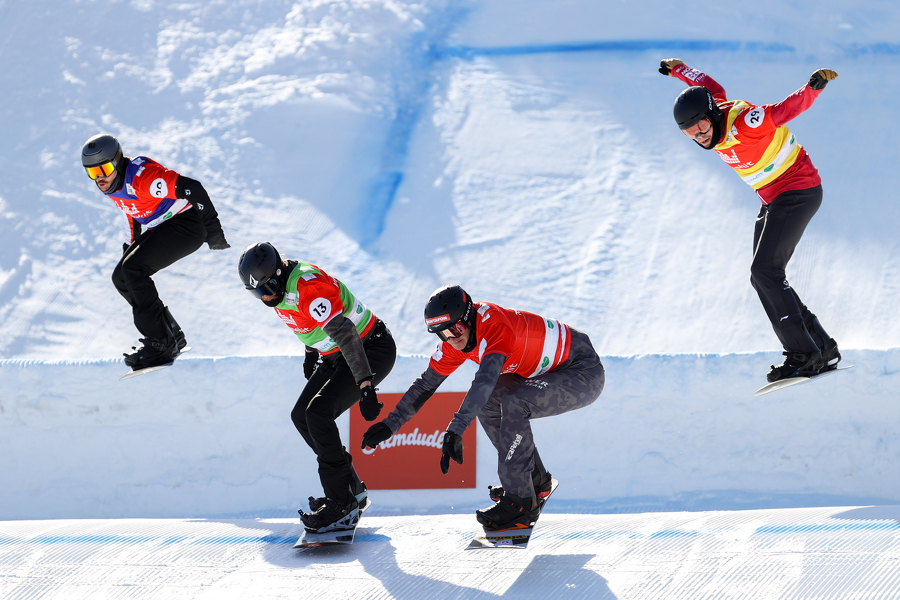 What a wonderful day to have hosted a FIS Snowboard Cross World Cup for the very first time. Bluebird sky, sunshine all the way and perfect conditions welcomed snowboard cross athletes on Thursday morning in Reiteralm, Austria, for a day of exciting snowboard cross action.

Moioli was dominating every heat of the day and therefore obviously feeling strong heading into the last heat of the day. And in fact, it was Trespeuch and Moioli out of the start gate first and getting into the lead of the four. Moioli soon gained enough speed to get into top spot, while Trespeuch was in the following position, while Lindsey Jacobellis sat in third and Raffaella Brutto in last.

Then suddenly, Trespeuch crashed after losing balance after one of the rollers, making the impression to be out for the race, but then just a split second later, Brutto also crashed over the exact same roller. So, there were two athletes down and Moioli and Jacobellis all alone to be finishing the run, while Moioli was clearly in first position, claiming her 15th career victory and Jacobellis crossed the finish line second, making it her 54th World Cup career podium.

And then only a couple of moments later, Trespeuch from team France rounded out the podium and soon later Brutto came down into the finish on her board showing that she did not injure herself.

“I have no words really! I have never been here before in Reiteralm and I didn’t know what to expect, but the course is super fast and fun and icy and it really deserves to be called “World Cup race”,” a smiling Moioli said after the race. “It has really everything: big turns, jumps, a good start section, so it’s really great. I want to say “Thanks” to Reiteralm and also I am super happy to get the victory after a good qualification and after the silver medal last week, it’s almost a revenge to take the win,” Moioli continued.

The Austrian was as quick as a torpedo out of the gate, while the 19-year-old Canadian was at his tails like his shadow, Eguibar was able to position himself into third and Mick Dierdorff being in fourth. In one of the following icy banks, however, the American was able to take the inside line and was just head-to-head with the leading Hammerle.

All of a sudden, all four were making a pack again, being super close to each other and it almost looked as if Haemmerle would be really threatened by his competition to lose his leading spot.

The Austrian was however clearly on fire and fighting every inch of the course to win at home, so he generated some speed to be even faster in the front, while the three remaining athletes in the back were battling it out for the remaining spots. It was again the inside line of one of the following banks, which this time helped the World Champion Eguibar to get into second and Dierdorff also chose an inside line, which helped him get into third position, leaving Grondin in fourth.

At the very finish part of the course, Haemmerle pushed as hard as he could to get faster again with Eguibar right behind him, but the Austrian was able to take the win at last, making it his 11th World Cup victory, while the World Champion got second place and Utah 2019 World Champion third.

“It was definitely a bit of a revenge for Idre to take the win now after the silver medal at the World Champs. I was super happy to bring it down from the start. I had a little mistake in turn one, it got a little tight in turn two, but I just gave everything and. My techs did a great job with my board, so I was just able to take it home,” a very happy and relieved Haemmerle commented after his victory.

There are also two new World Cup leaders after today’s race, which are actually the winners of the day. Michi Moioli is now in first rank counting 250 points, Eva Samkova is 45 points behind in second rank and USA’s Faye Gulini in third rank with a total of 186 points.

Alessandro Haemmerle is now leading the World Cup standings on the men’s side with a total of 220 points, which is a 58-point margin ahead of Eliot Grondin, who has a total of 162 points and in third rank it’s Valmalenco winner Glenn de Blois with a total of 147 points.