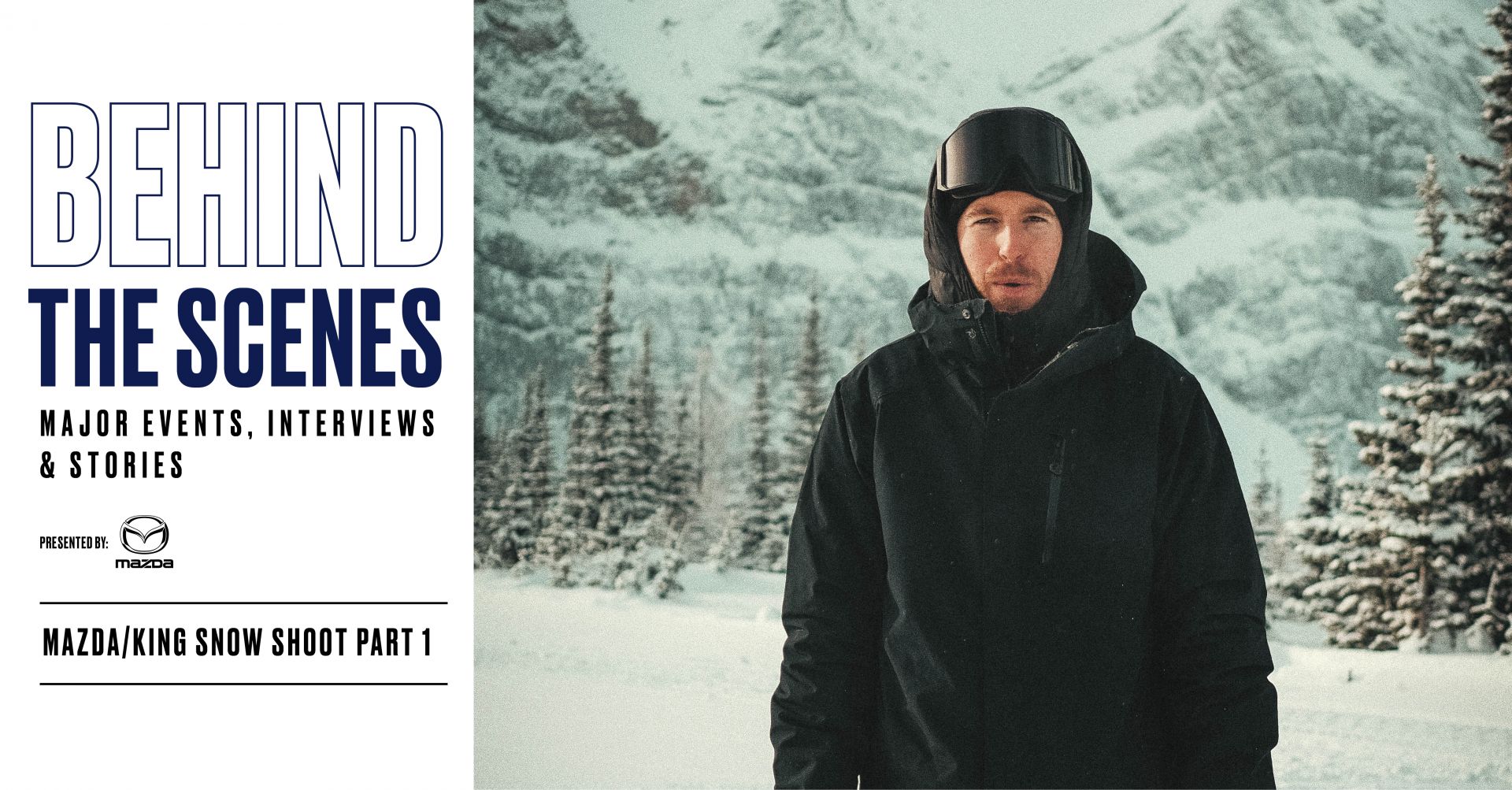 Its Thursday, January 9th after a brief airplane ride to Calgary from Vancouver. Crispin Cannon, Art Director for King Snow Magazine, arrives in the new Mazda3 All Wheel Drive (AWD) with a delivery of Burton Snowboard goods in preparation for the shoot. It feels a bit like Christmas unraveling a brand new Burton Custom snowboard, boots, bindings, goggles, and Anon helmet. Excitement and curiosity on how the gear will perform has me longing for the days ahead. I begin to mount the bindings onto the board. I plug in my new ‘Iron Maiden’ Kuu waxing iron and just like the old competition days, I begin to melt the wax into my snowboard in anticipation for the cold days that lie ahead. The next morning, we set to the Trans-Canada highway, behind the wheel of one of two All Wheel Drive Mazda3s. 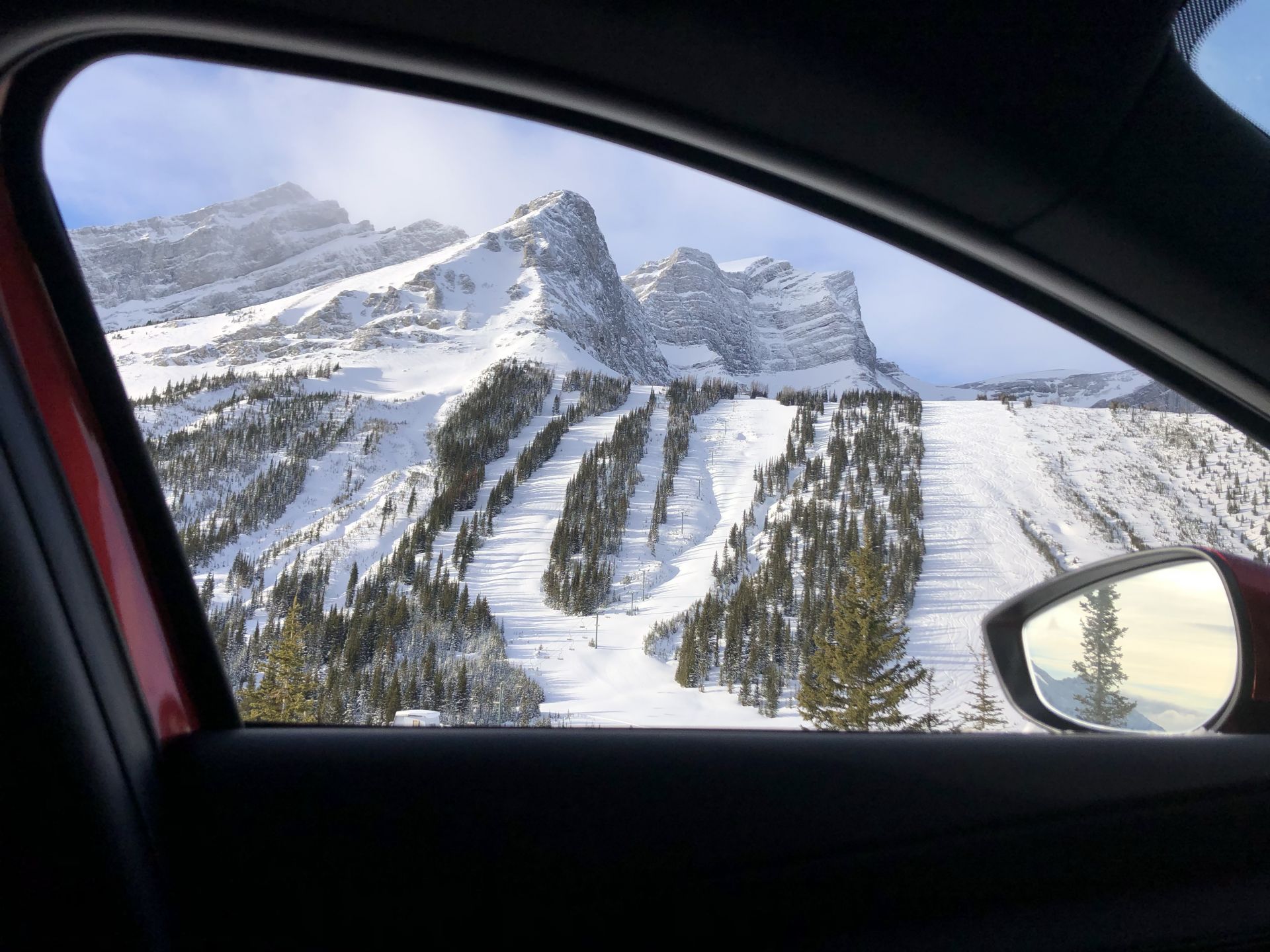 In the driver’s seat of the new Mazda3 AWD I familiarize myself with some of its tech. Synching Apple Car play to my phone and to my delight I activated the heated seats and heated steering wheel. While I sit in optimized comfort I eagerly hit the road with optimism and sense of adventure. The roads were bare as I left the city limits and my eyes gravitate toward the snow glazed mountain tops that are the Rockies. As I drove closer to the Kananaskis turnoff layers of snow solidified the roads and the AWD was in motion. The car has a sporty low-to-ground feel, and a surprising amount of pep in the beholder of the gas pedal. Yet, this little 5-door machine leaves you feeling confident, safe, and grounded. In my rear view mirror I see the other Mazda3 approaching. This Mazda3 convoy is only 20 km’s out from the entrance to Fortress Mountain. We pull up to a gated barrier at the mountain’s base – now only a 4 digit code away – up a windy snow covered road that led us to the top. 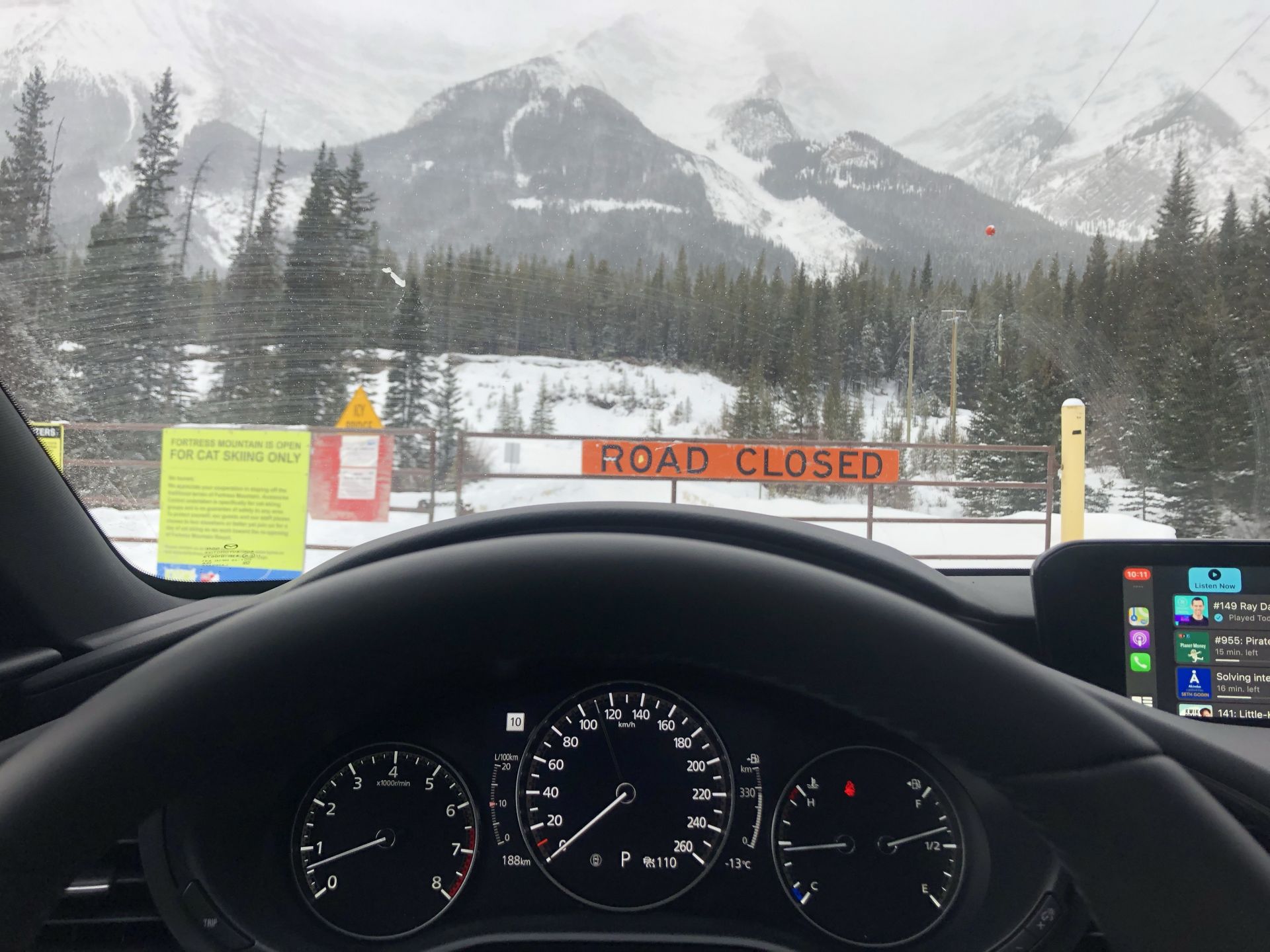 A rooster tail of snow trails behind the leading Mazda as we make our way up the unofficial test track, private and unencumbered. We challenged the AWD being generous on the gas around every turn and like a snowboard with freshly tuned edges the car stayed its course. Even with a goal to drift the car around each corner, the AWD and traction control provided a relentless grip and stability through the corners in unwavering style. I was impressed as we quickly gained elevation with consistent power and uncompromising control.

As we crest over the final turn, you’re granted with an enticing ridgeline host to 4-5 ski runs. Sights of ski tracks mark the testament of early worms where a team of ski tourers were exercising avalanche safety and have congregated near the decommissioned ‘Canadian Triple Chair’. This view was nostalgic reminding me of the days when Fortress Mountain was operating as a resort since it closed its doors to the public in 2006. Since then, Fortress has transitioned into a cat skiing operation known as KaPow and anyone fortunate enough to go has access to a vast network of varying terrain and untracked runs. With only a little more to go, we parked in front of a row of garage bay doors. Inside we were greeted by “even-keel Mel” a custodian who welcomed us and was responsible for stoking the stove top fire place - the only source of heat within a 30km radius. Over the crackling fire he informed Crispin and I about the current state of Fortress and how it gained its unique artwork and signage that characterized the walls around us. 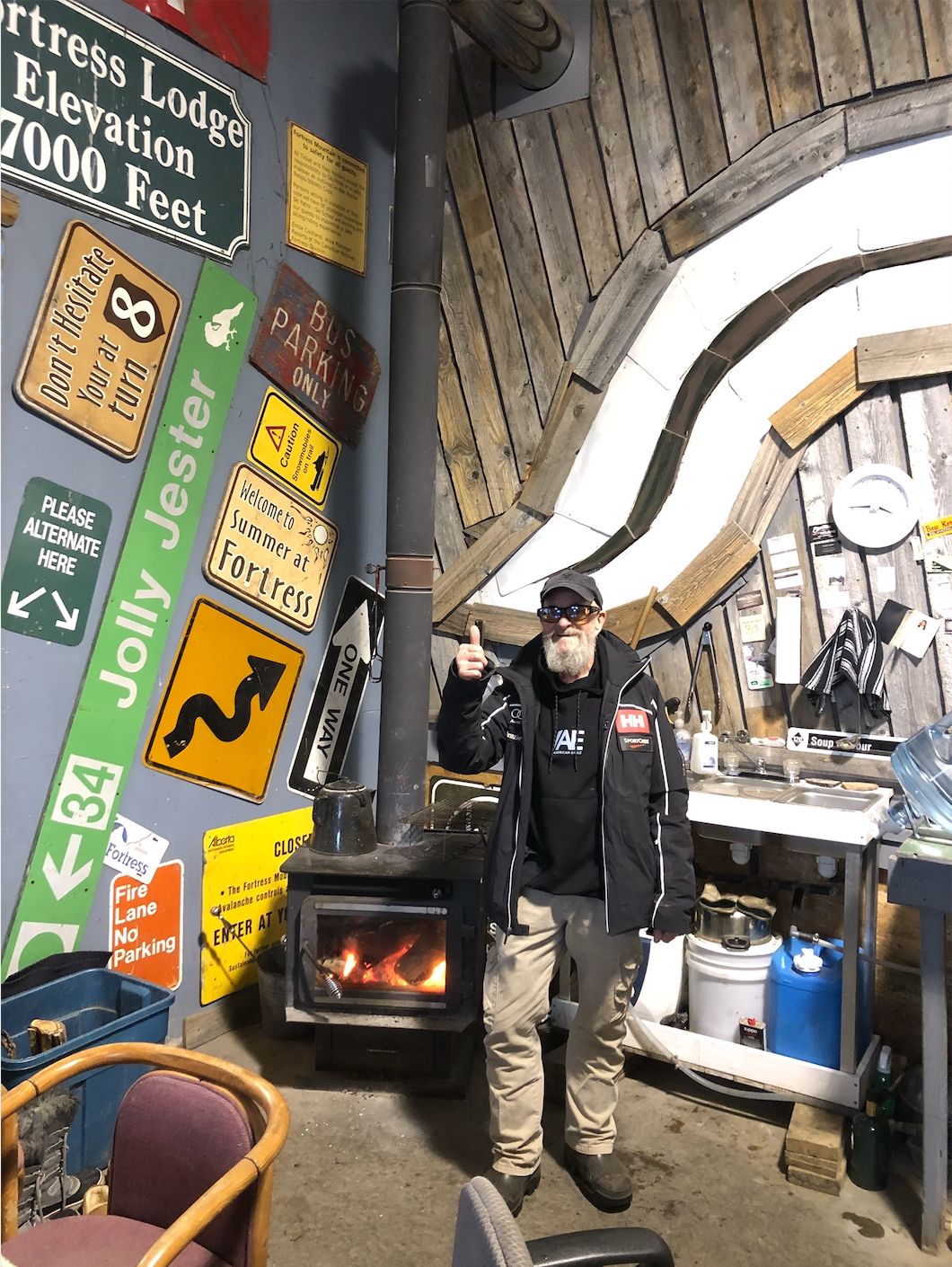 We geared up and laced into our boots and after debriefing with the Fortress crew Crispin and I were off on a snowmobile to rip up to the mound of snow that’s designated for the jump creation. I was in awe of the mountainous valleys on the both sides of the ridgeline  surrounding us. After hitting the kill switch on our snowmobile, it seemed pleasingly quiet and far different from the typical high traffic flow, and sounds of gas powered chairlifts you would find at ski resorts. There was an overwhelming stillness to the air and calmness around us. Making you feel insignificant. Humbling. It was peaceful.

As we take in the scenic landscape around us we take a minute to assess the large mound of snow designated for the build of the jump wedge. We can hear the diesel fuelled snowcat trailing in the distance targeted to arrive at the jump site. Upon his arrival we were greeted by “Chris Mueller” snowcat operator who would be assisting us with the jump build. Understanding the importance of limited time when shooting due to limited daylight in these mountains, Crispin reiterates to me the goal is to have a jump big enough to perform a backside 720 comfortably and not too big that it would interfere with the success rate of a landed trick. With this is mind we agree on where the wedge should start and finish. I jumped into the snowcat with Chris at the controls maneuvering the snow with what looked to be a joystick reminiscent to an Atari video game. While I was sitting in the passenger seat of this machine I felt lucky to have a part in the creation process admiring Danny Davis and the work he has put forward to his series of Peace Park creations. This was cool. 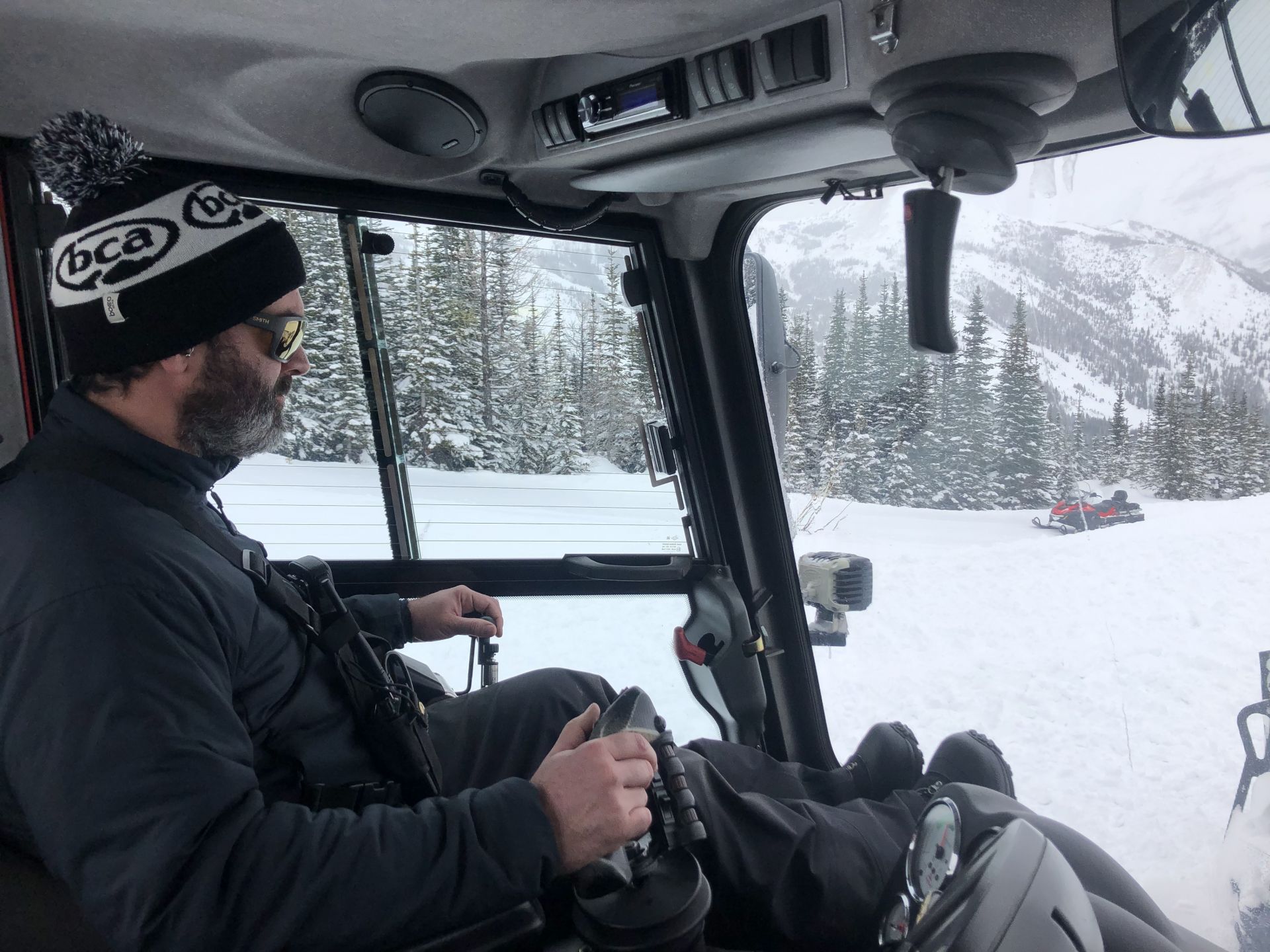 We came back to the jump site the very next day, and we had our work cut out for us. With shovels in-hand Crispin and I got to bond over some laborious shovel work to remove and shape several cubic meters of snow. The goal was to shape an irregular snow pile that was our wedge (jump takeoff) into a distinguished triangle with precise edges resembling that to a block of cheese. Aesthetics plays an important role in filming where the minutia details become a huge focus in preparation and on-set. On any set it’s generally crucial to be conscious of where you walk at all times as your footprints would be enough to render a shot unusable in some cases. We slugged and chipped away at the jump. Knowing Crispin has worked with many Canadian snowboard legends over his time I found it a fitting time to ask him which of the Man Boys (a popular Canadian snowboard crew) has the hardest work ethic? He responds “Chris Rasman without a doubt. It’s easy for riders to lose enthusiasm as the jump’s build is nearly finished”. People begin to relax, with a sense of accomplishment before it’s actualized. Not wanting to settle yet, I chuckled, and we used our rhythm to carry us through and stay warm. 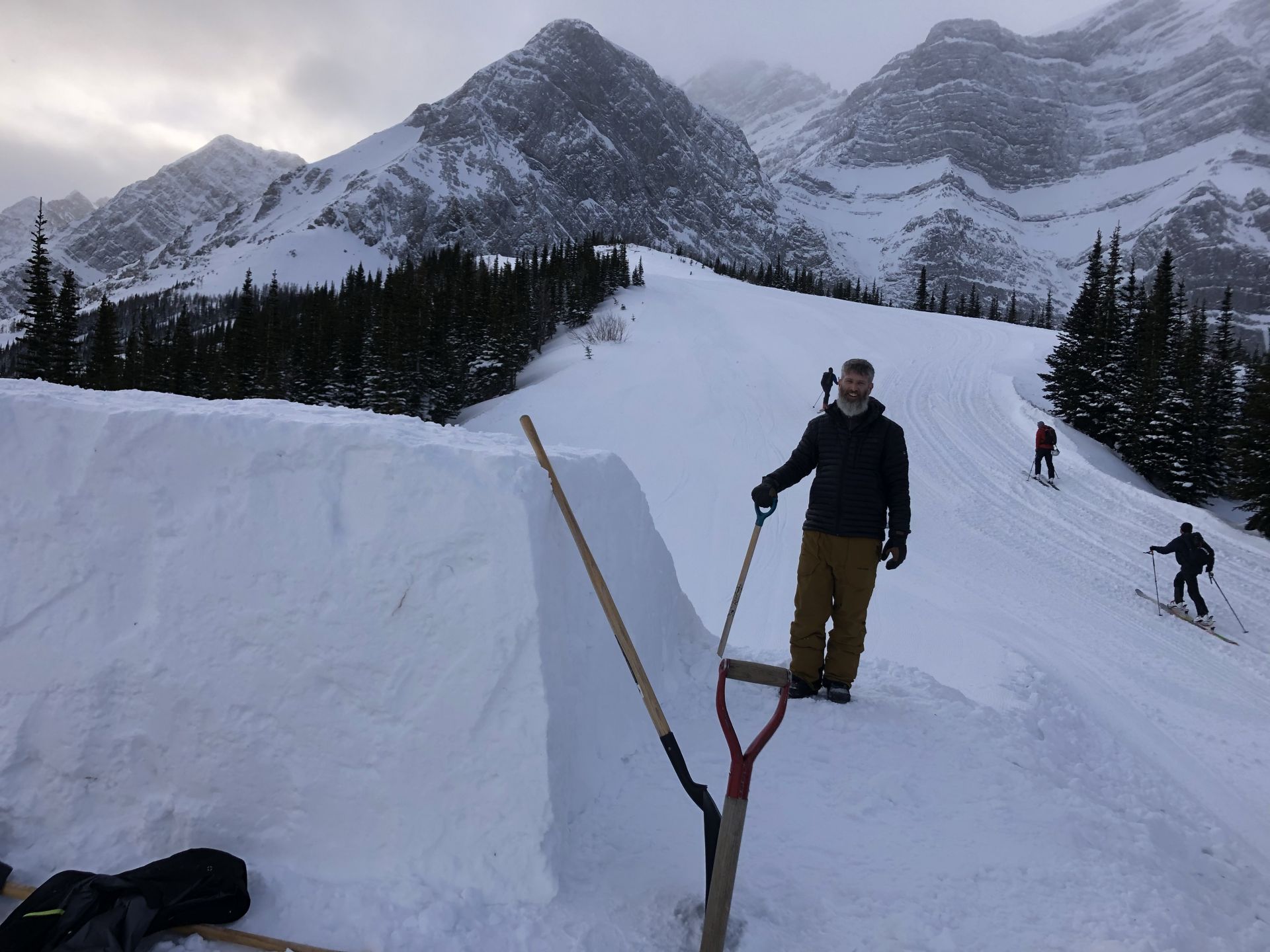 Production crew arrived on day 3, and this day was a test day for the film crew to go over angles and an opportunity for me to practice my tricks on the designated features – sliding on a 25ft rail and getting comfortable with a BS 7 on a jump. Temperatures were hovering around -25 degrees Celsius and working its way toward a bone chilling -34 for the film days that followed.  After a couple of successful lands of the BS 7 on the jump in the morning I moved on to practice the rail. I shovelled the snow off the in-run with the help of a slide-slip crew (staff on skis to plow sideways on the in-runs to clear a path to make the course faster) for the rail as I did for the jump. I practiced the - frontside bluntslide to fakie - on the rail to the point where I was confident with it, after receiving some key pointers from a snowboard friend ‘Will Fraser’ who also took on the role as in-car photographer/videographer. After this mini rail session, I decided to test out the jump once more to get a feel for the mouthguard GoPro ‘GrillMount’ as this was to be used in one of the desired shots. Temperatures had noticeably dropped since the morning and a new layer of fresh snow has now covered the in-run. Clouds filled the sky making the light flat (merging a contrasting image of colours into one like a blanket of white) before me. I drop making my way down the in-run of the jump, as my edges disrupt the fresh layer of snow below me. I tuck for speed, taking a more direct line than I have all morning (to account for the fresh layer of snow – knowing this typically slows a rider down). I struggle to see the edge of the takeoff. With my depth perception – hindered - I couldn’t tell if I was going too fast or too slow but something didn’t feel right as I approached the jump.

To be continued with Part 2…

Check out the full commercial here