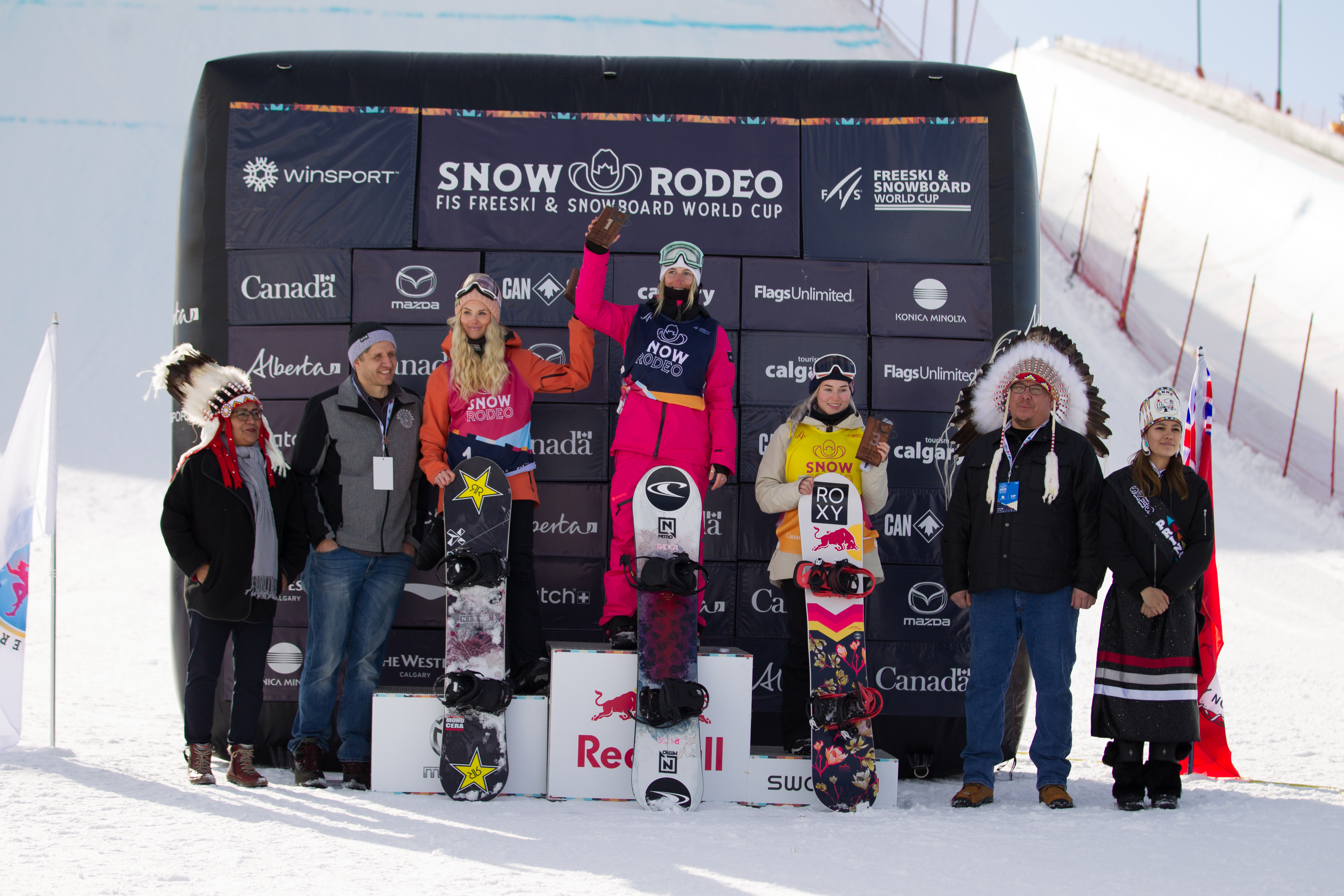 The SNOW RODEO event includes both the World Cup disciplines of Slopestyle and Halfpipe. It also includes both snowboard and freeski as mirrored World Cups. A total of 8 World Cup titles get fought for during the weeklong event.

Laurie was the odds-on favourite to win the event having proven herself consistently since her Olympic Silver medal as being one of the strongest and most consistent female riders in the world. Both of Laurie’s run scores topped the field effectively making her second run a victory lap. Second place went to Silje Norendal (NOR) and third place went to Katie Ormerod (GRB). Laurie has already stood on the podium four times this winter at Elite level events in Europe, Asia the US and now Canada including a Silver at the X Games in Aspen.
16-Year-Old Canadian Liam Brearley placed third in the Slopestyle component of the Snowboard World Cup housed within Winsport’s Canada Olympic Park’s Snow Rodeo Festival. Liam is a Next Gen athlete on the Canada Snowboard National Program. He is progressing rapidly up the ranks having just returned from Switzerland where he achieved the unique result of placing top 3 in Slopestyle, Big Air and Halfpipe at the Youth Olympic Games. Liam is a great young future star who Canada Snowboard recently profiled to get a glimpse into the what he has to do to make the costs of the sport manageable. https://www.youtube.com/watch?v=RE-RfWXi2Ok

Scotty James has his record-breaking winning streak ended by the technically brilliant Japanese 17-year-old Ruka Hirano. Ruka Hirano took the Halfpipe Rodeo title with near flawless runs scoring a 94.7 run and a 92.75, both of which won the event over Scotty’s 92.25. Ruka was not only technically superior on the night but also launching higher than anyone else the whole way down the halfpipe and entertaining the crowd in the process. Scotty won Bronze to Ayumu Hirano’s Silver at the 2018 PyeongChang Olympics. Despite sharing a common last name the two young Japanese riders are unrelated although to Scotty it must be challenging to have been beaten by so few riders in major events over the past 3 years and yet he has been beaten twice by a young Japanese Ayumu.

Canada’s highest-ranking halfpipe competitor Derek Livingston had a tough night breaking two of his boards in practice. Despite the huge handicap of competing on a borrowed board the majority Canadian crowd hyped Derek up to a very credible 7th with his supporters wearing giant Derek heads to show the love.

“Last night’s Halfpipe Final was great and really engaging. There were people everywhere which really goes to show what a great atmosphere can be created with a night-time final. The Halfpipe was a perfect competition pipe and the live TV footage under lights looked  amazing.” Roby Moresi Contest Director for Park & Pipe

Scotty James did get the last laugh and the main prize for the night however in taking home the FIS Crystal Globe for another year. The Snow Rodeo here in Winsport’s Canada Olympic Park, Calgary was the last stop on this year’s FIS World Cup Tour and with Scotty James being undefeated for the past few years at every Elite level event in halfpipe he was the standalone contender for this year’s title. 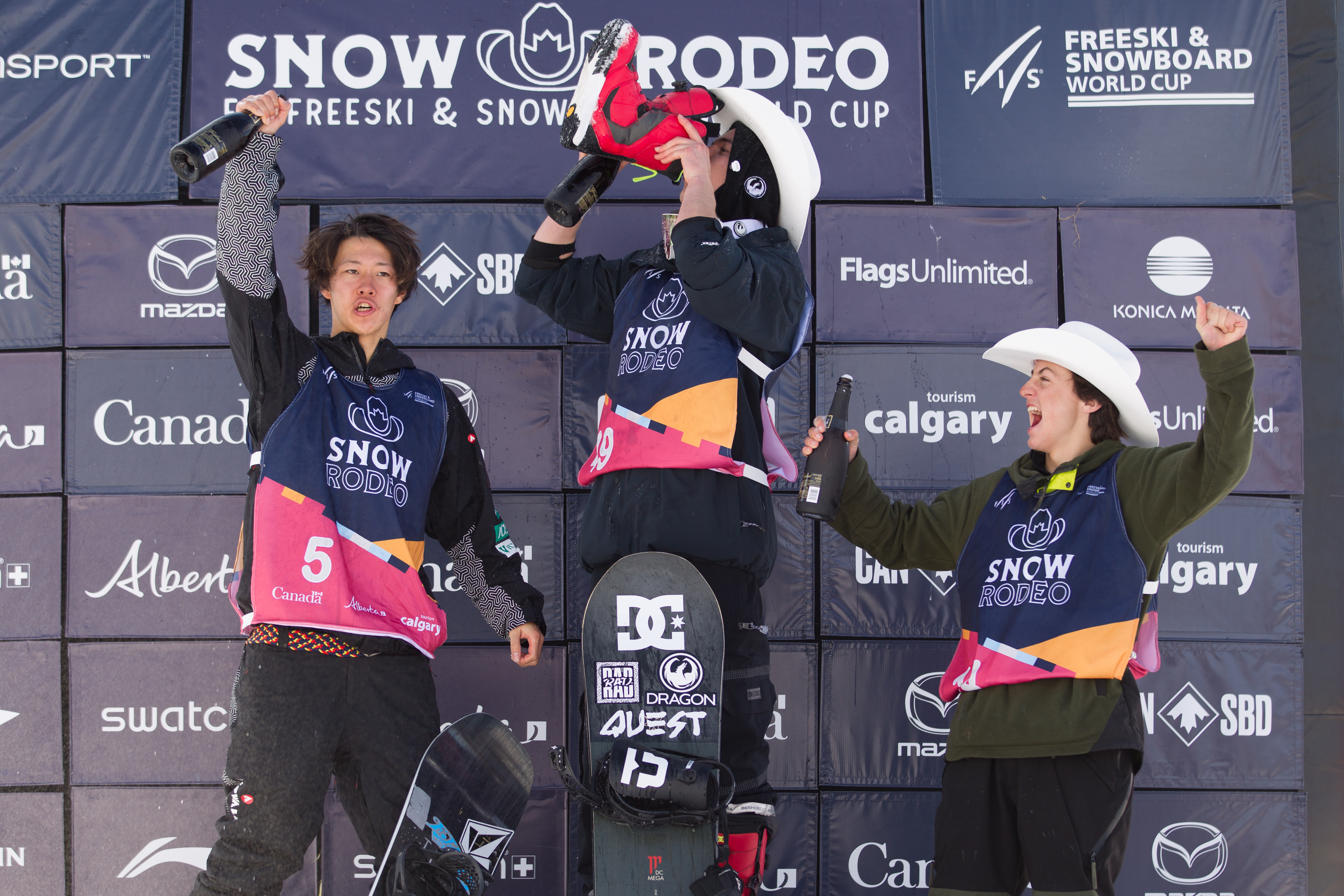