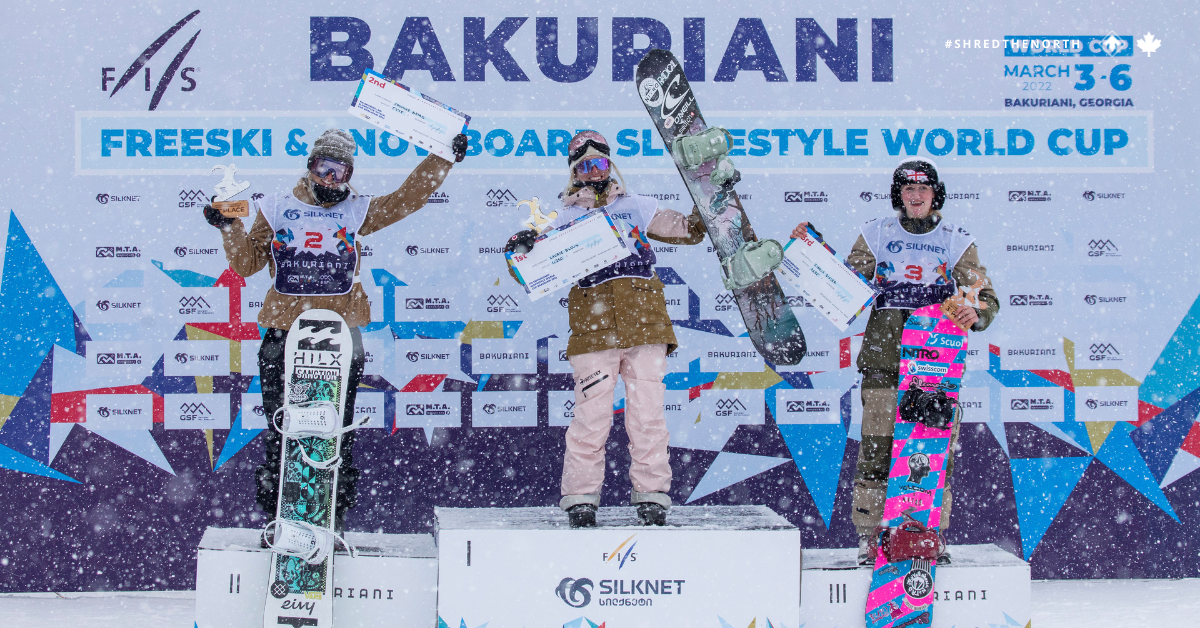 Laurie Blouin and Jasmine Baird won gold and silver on Sunday at the Bakuriani Slopestyle World Cup in Georgia.

On her first run on Sunday Laurie of Stoneham, Qc,  laid it down with her signature smooth style, kicking things off with a frontside 180 on to switch backside 360 out on the first rail, into a switch backside 540 nose grab, a backside 360 melon on the second kicker, and then a frontside 720 tailgrab on the money booter, before finishing things off with a 50-50 frontside 360 out on launch rail, and then a gap to frontside boardslide on the down-flat-down rail.

The run would earn her a score of 76.25 which she would not improve upon with her second attempt and, when none of the other women could match her with their own second runs, the 25-year-old would earn her second career World Cup win and her 10th World Cup podium.

“I’m feeling relieved, to be honest,” Blouin said from the finish area, “It was a tough week, everyone rode well even though it was really tough conditions, and the park crew made it work even with not a lot of snow. We got the contest done and I’m happy with the win.”

Just behind Blouin in second place was her Canada Snowboard teammate Jasmine Baird of Whistler, BC, as the 22-year-old put down a run that included a stomped cab double underflip 900 on the second hit and earned her a score of 70.00 for the third World Cup podium of her career.

This competition was a good preparation for Laurie and Jasmine, as the FIS World Championships will be held in the same place in just a year.  With this result Laurie has taken the lead of the Slopestyle FIS World Cup overall standing and will be wearing the yellow bib heading into the last two World Cup events of the season.