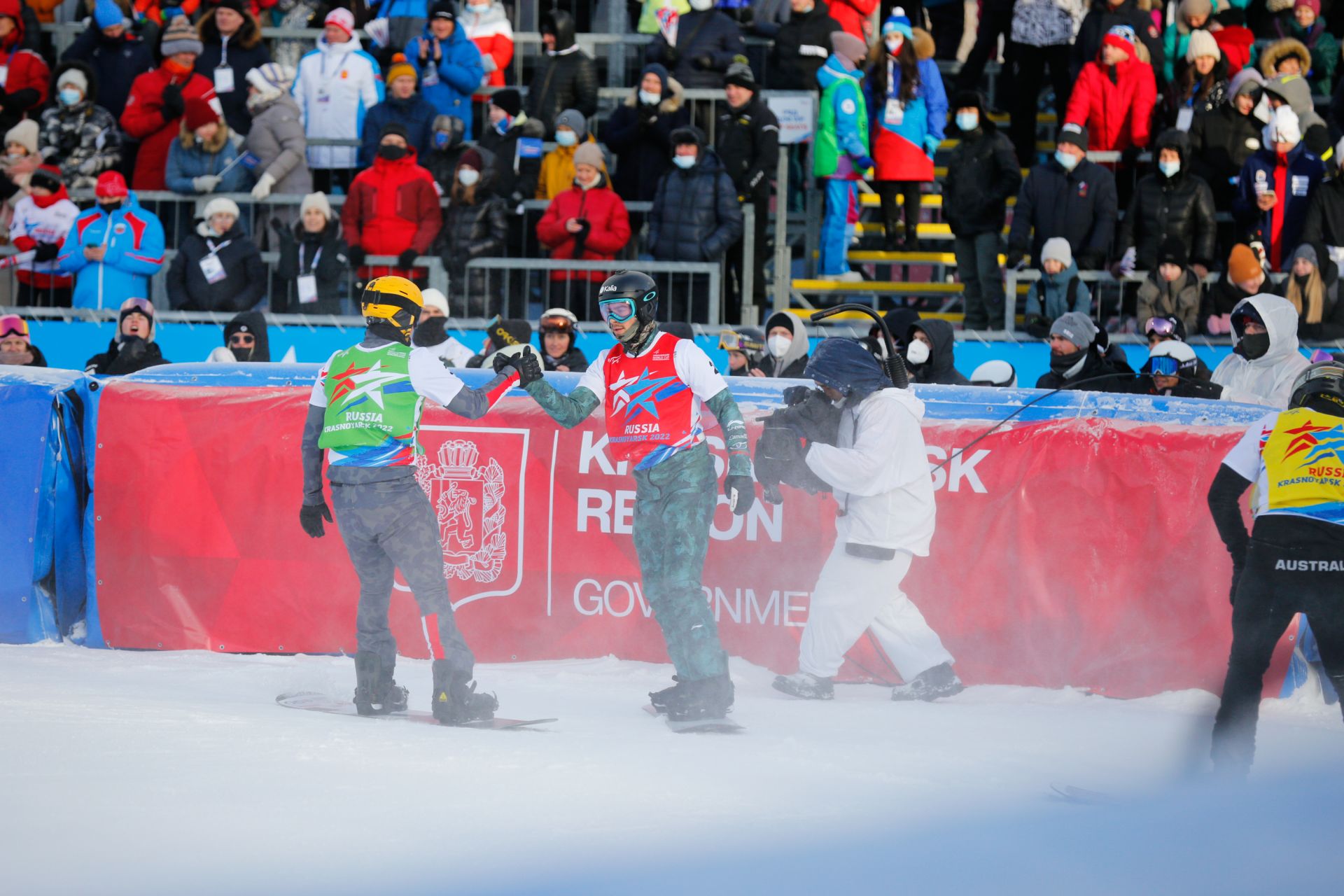 It was the second of back-to-back competitions here in Krasnoyarsk, Siberia (RUS) and also the last chance for the athletes to qualify for the Olympic Winter Games in Beijing 2022, which start in less than 30 days.

Eliot Grondin (St-Marie de Beauce, QC) got the start section perfectly, so he was able to get into the lead, whereas Dusek and Lambert were head-to-head battling for positions three and four and Noerl sat in fourth. It was the Austrian, who then took second position, but just before the jump, the heat got super close again with all four athletes taking-off almost at the same time. That’s when the German seemed to have won the most speed and therefore landed in first position.

Then, entering into the next turn with the speed from the jump, Dusek took the inside line and wanted to attack the German, who was still a tiny margin ahead and Lambert was in third position.

After the second roller section, Grondin made the passing move on the Australian and sneaked into third position. Although still pretty tight, the riders then got in this formation over the last jump and into the finish.

Notably Nova Scotia’s own, Liam Moffatt (Truro, NS), edged his way into the Top 10 and battled his way to 9th.

On the women’s side Audrey McManiman (Saint-Ambroise-de-Kildare, QC) had a big weekend with 6th and 8th in each of the World Cup races. Canadian teammates Tess Critchlow (Big White, BC) and Zoe Bergermann (Erin, ON) tapped their way into the top 10, edging their way to a 7th and 9th place finish.

Shoutout to NextGen rider Evan Bichon (Mackenzie, BC) for a career best performance at a World Cup.

To schedule an interview with Eliot Grondin, please contact: zrqvn@pnanqnfabjobneq.pn

Across the seas in the United States we had the Mammoth Grand Prix World Cup in both halfpipe and slopestyle where riders had the last chance to solidify their rankings for their prospective Olympic Teams. Fierce winds presented some safety issues for the riders and ultimately schedule changes but needless to say the competition kicked offed in an anticipated competitive driven fury. 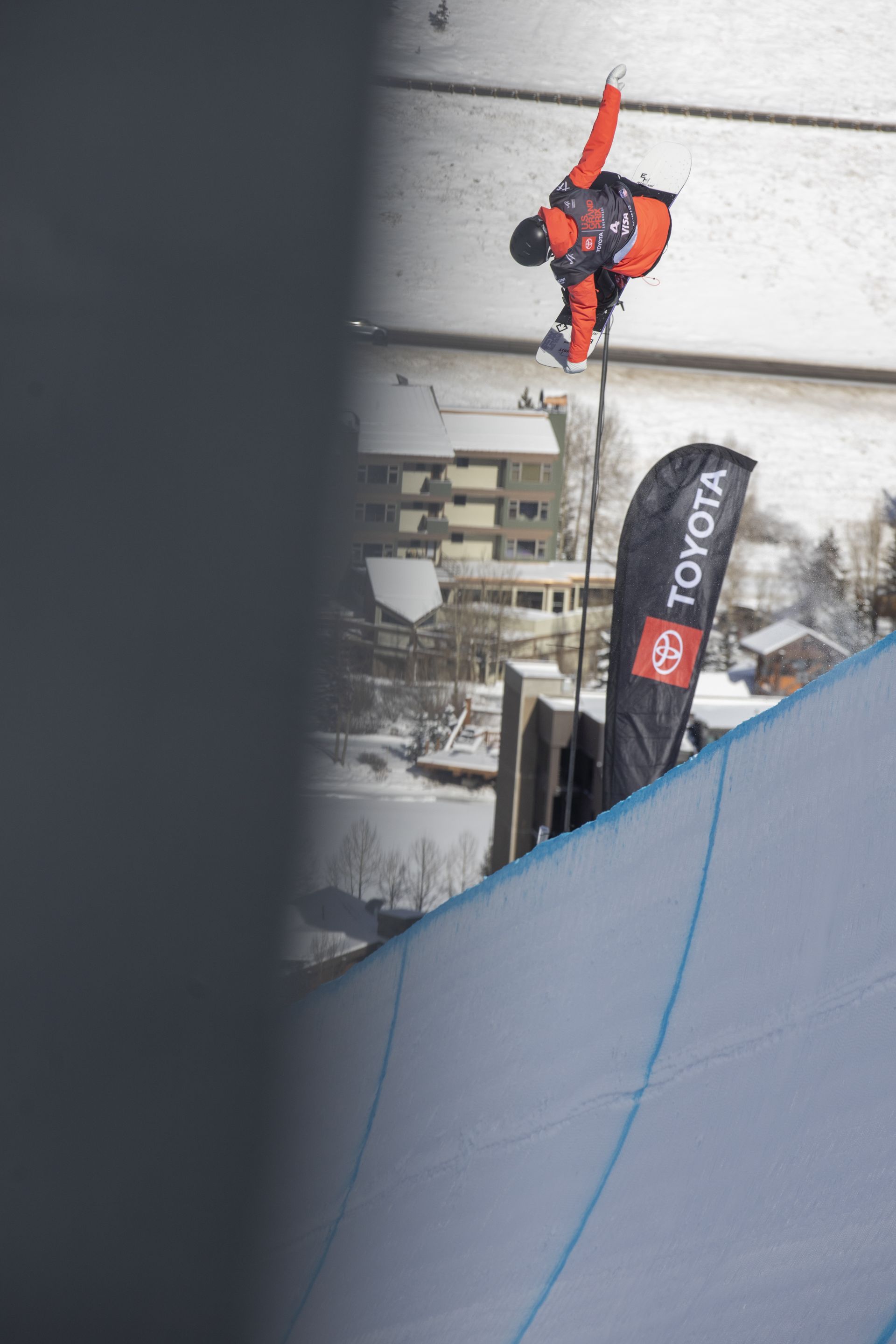 Elizabeth Hosking (Longqueuil, QC) was the lone Canadian finalist proving to the world she belongs on the World Cup circuit with a run backed by strong riding fundamentals consisting of a FS 540, BS 540, FS 1080, Cab 720, FS 720 to finish in 5th. This marks her second top 5 finish at World Cup for the 2021/22 season, with a 4th in halfpipe at the FIS Copper, CO World Cup only weeks earlier.

On the lengthy slopestyle course that had enough room for an Olympic-sized hockey rink between each features created a challenge for the riders to navigate the speed appropriately, forcing some riders to overshoot or undershoot the jump section. An added element and challenge that needed to be considered, however in the end it was one that all riders faced.

Darcy Sharpe (Comox Valley, BC) set a strong first run with the only rider to highspeed 180 butter into a backside 270 gap boardslide on the double kink, and front board sameway on the rainbow rail while holding a euro-indy grab held the whole way and then some (if you gave the guy a cup of coffee in his free hand you would be elated to have not a drop lost), all this backed by a backside double 1080 to a frontside triple cork 1440 indy on the last jump. This was enough for him to defend his Canadian lead with a 4th place finish.

Seb Toutant (Repentigny, QC) drew from his trick arsenal that got him gold at last weekends Snow Rodeo World Cup in Calgary with a backside 1260 of the heels into a clean cab 1440 on the finish jump. This was enough to put him in 5th.

All eyes were on Mark McMorris (Regina, SK) in the final moments of the event. Coming up short on his final run with a fall that would have arguably challenged the podium, if not the lead, ended up in 9th.

Four Canadians on the podium at the Para World Championships