This week is National Volunteer Week and we would like to celebrate the thousands of volunteers who make snowboarding happen across the nation.

Canada Snowboard would like to pay tribute to one individual; Claude Dumontier, for his tremendous support over the years. Claude is one of the oldest Snowboard TDs in North America, he has been officiating snowboard events since the 90’s and he is the founder of Quebec Snowboard.

He is still officiating, and he loves to help at all our events in Quebec. Most recently he was the Technical Delegate at the Air Nation event in Mont Tremblant. Claude has been a Volunteered and TD in snowboarding for the past 35 years and counting. He can’t wait for Canada to get some FIS snowboarding events back in 2021 and he stayed in shape skiing 72 days in Mont Tremblant this winter sometimes top to bottom without even stopping!

We sat down with Claude for a quick Q&A

When and how did you get involved in snowboarding?

In 1997 I was attending a FIS meeting for the alpine skiing slopes committee as an inspector and controller and FIS Alpine TD in Salzburg, Austria (City of Wolfgang Amadeus Mozart). A colleague invited me to take the course and exams to become a

FIS Snowboard TD.  After I succeeded, I got back home, and the Quebec Ski Federation hired me.

I was the Director of Surf Des Neiges Quebec for 13 years. I was involved in the training and recognition of athletes, officials, coaches and events.

The federation obtained financial support from the Ministry of Recreation and Sports (MELS).

I also got used to the judge’s vocabulary.

Also, a snowboard for a young Québécois: "my snow!"

What are you the proudest of as a volunteer over the years?

The progression of athletes at the international level in World Cup and X Games.

The certification of officials and FIS TDs in snowboarding and coming from snowboarding backgrounds, since we were all from the alpine skiing world back then. 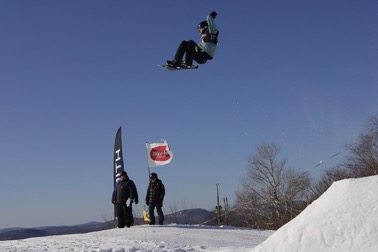 Claude on the jump at the Air Nation in Tremblant

What is your best memory of volunteering during a snowboarding event?

The Vancouver games. I prepared and inspected the slopes for the certification at Cypress Mountain for SBX and PGS. During the games I was a gate judge for SBX in section 007. The chief of events communicated to me saying on the radio: "Mister BOND, hello JAMES, is the course clear? Course clear, send next heat!" 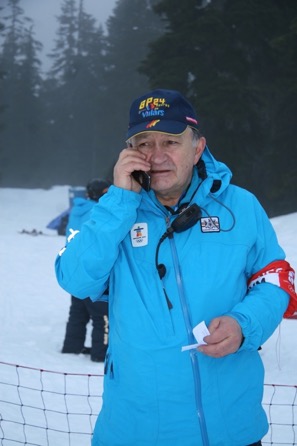 Hi this is Bond, James Bond

I also did a demonstration in front of the camera, showing how to stop a racer using a yellow flag for: “STOP/START” during the PGS event.

I also remember the pouring rain during the race and Jasey-Jay Anderon winning the Gold Medal. We lived in the “British Property” above Marine drive, overall great atmosphere and camaraderie. 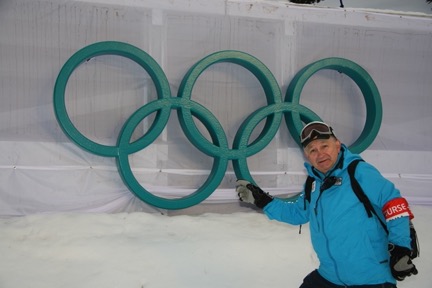 Claude at the 2010 Vancouver Olympic Games

Favourite snowboarding event where you volunteered and why?

I have participated in many events either as an official or a volunteer.

I don't have a preference. I enjoyed meeting the athletes and seeing their progress, these kids are self-sufficient and love their sport.

At Tremblant during a Snowboardcross event, two deer erupted on the track! Disoriented and panicked they ended up in the B-nets.

Indirectly, snowboarding has contributed to the revival of many ski resorts, attracting new sportsmen from different cultures.

To Claude Dumontier and all the volunteers around the nation thank you for all your time and hard work!