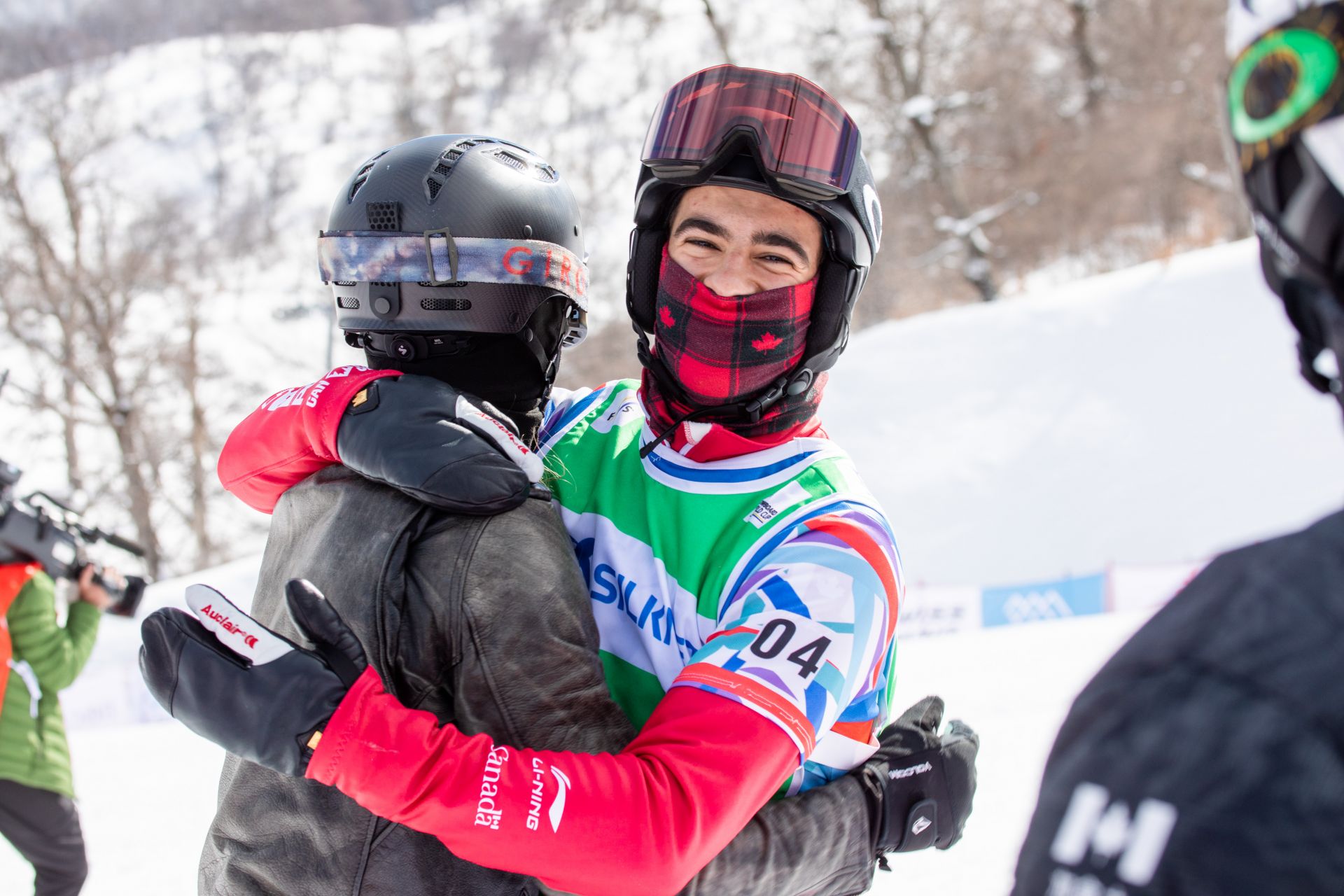 For the final heat of the day, it was Idre bronze medallist Eliot Grondin (CAN), who had been showing incredible performances so far in this season, World Cup leader Alessandro Haemmerle (AUT), his teammate Lukas Pachner and Italian Lorenzo Sommariva, ready to conquer the 2023 Bakuriani World Champs course.

Riders ready – attention – GO! Grondin shot out of the start gate in an incredible manner, immediately getting into the lead, whereas Hammerle got neck-and-neck with him and tried to position himself in first, but did not succeed to do so. Sommariva was sitting in third and the second Austrian, Lukas Pachner, fourth.

Hammerle made an approach to pass the young leading Canadian after a bank turn, after gaining enough speed to make the move, in which he finally succeeded, edging Grondin to second position. After another turn, the Canadian had a little problem with keeping the balance on his board, but managed to stay on his feet.

Of course, that moment was the chance for Sommariva to approach Grondin and fight for the second spot. The Italian took the inside line at the following bank and overtook the young Canadian. And after the next jump and roller section that came up next, Sommariva even made an attack on Haemmerle to pass, which he managed to do.

But then, from the outside line, suddenly Grondin reappeared at the front of the heat and now it was also Lukas Pachner attacking from his fourth position. The athletes were now in a really close pack and on the final meters, Pachner even managed to pass Sommariva on the outside line and almost overtaking Grondin on the very finish line.

It was a photo finish in the end that showed that the victory went to Eliot Grondin, making it his very first World Cup win, second place to Lukas Pachner and rounding out the podium was Lorenzo Sommariva. 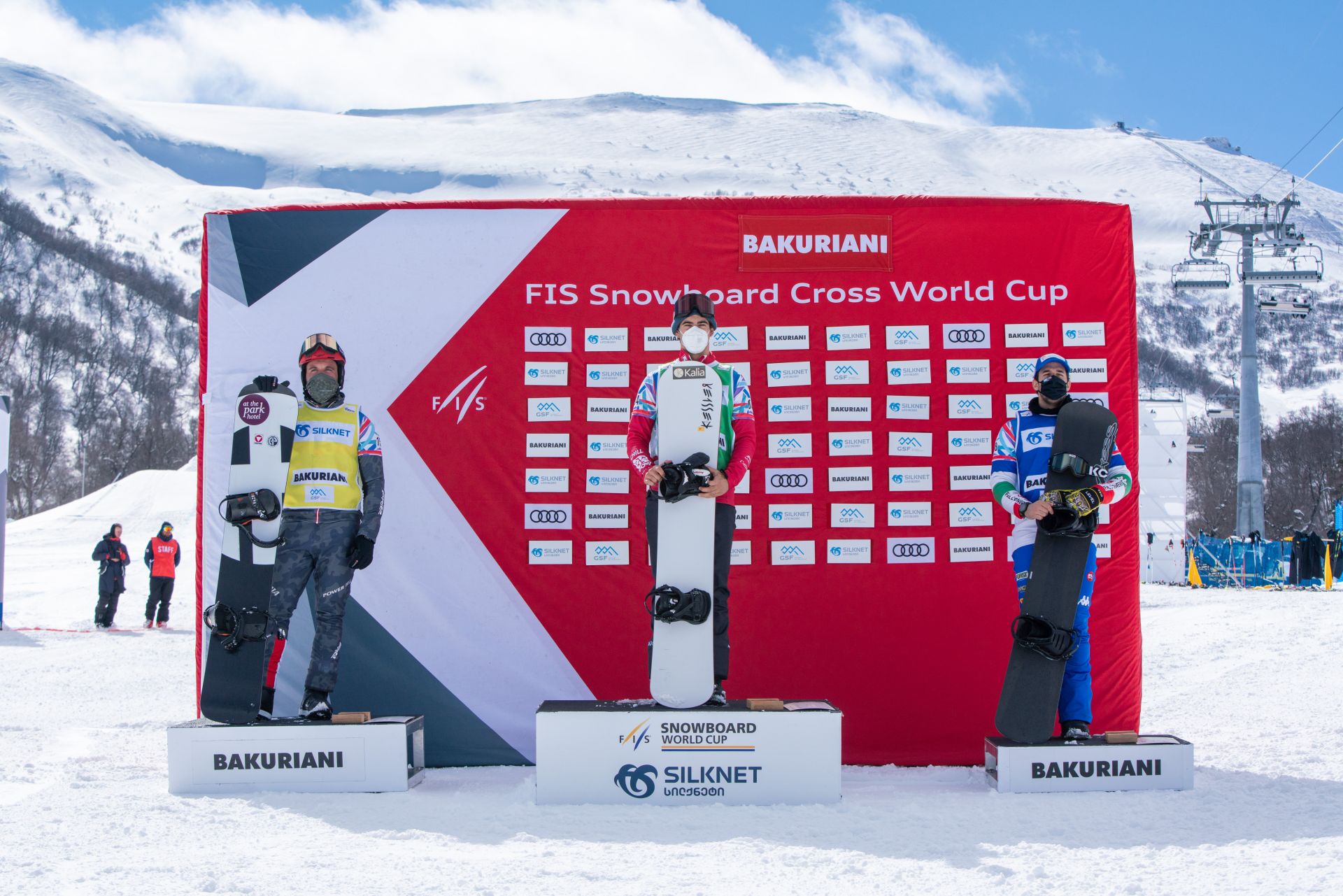 On the question, whether he expected the win today, Eliot Grondin answered: “I would not think so, no. In my first heat, I almost didn’t make it, it was super tight, but after that I figured out my strategy for the race and then I knew that I could win the start in the big final and let people pass me. And that’s what I did. Alessandro passed me and then also Lorenzo and for me it was the perfect situation to draft and pass for the finish.”

The 19-year-old continued: “I love it here. It is my first time in Georgia, it’s such a cool place and the people are amazing. I really love it here!”

As for the World Cup standings on the men’s side, with his fourth-place finish, Haemmerle is still in the lead with a total of 270 points, but really close behind him is Eliot Grondin with only eight points less. Sitting in third is Glenn de Blois (NED) with a count of 187 points. So, also for the men, all possibilities are still open as for the SBX crystal globe.

It will be interesting to see, if the leader bib will get a new owner on Sunday, as there will be another podium chance at the second of back-to-back races here at the 2023 World Champs track in Georgia with a pre-heat qualification in a holistic format, meaning in heats of four with top two athletes qualifying for the finals.

Zoe Bergermann (Erin, ON) led the charge on the women’s side for Canada cracked the Top 10 finishing in 10th