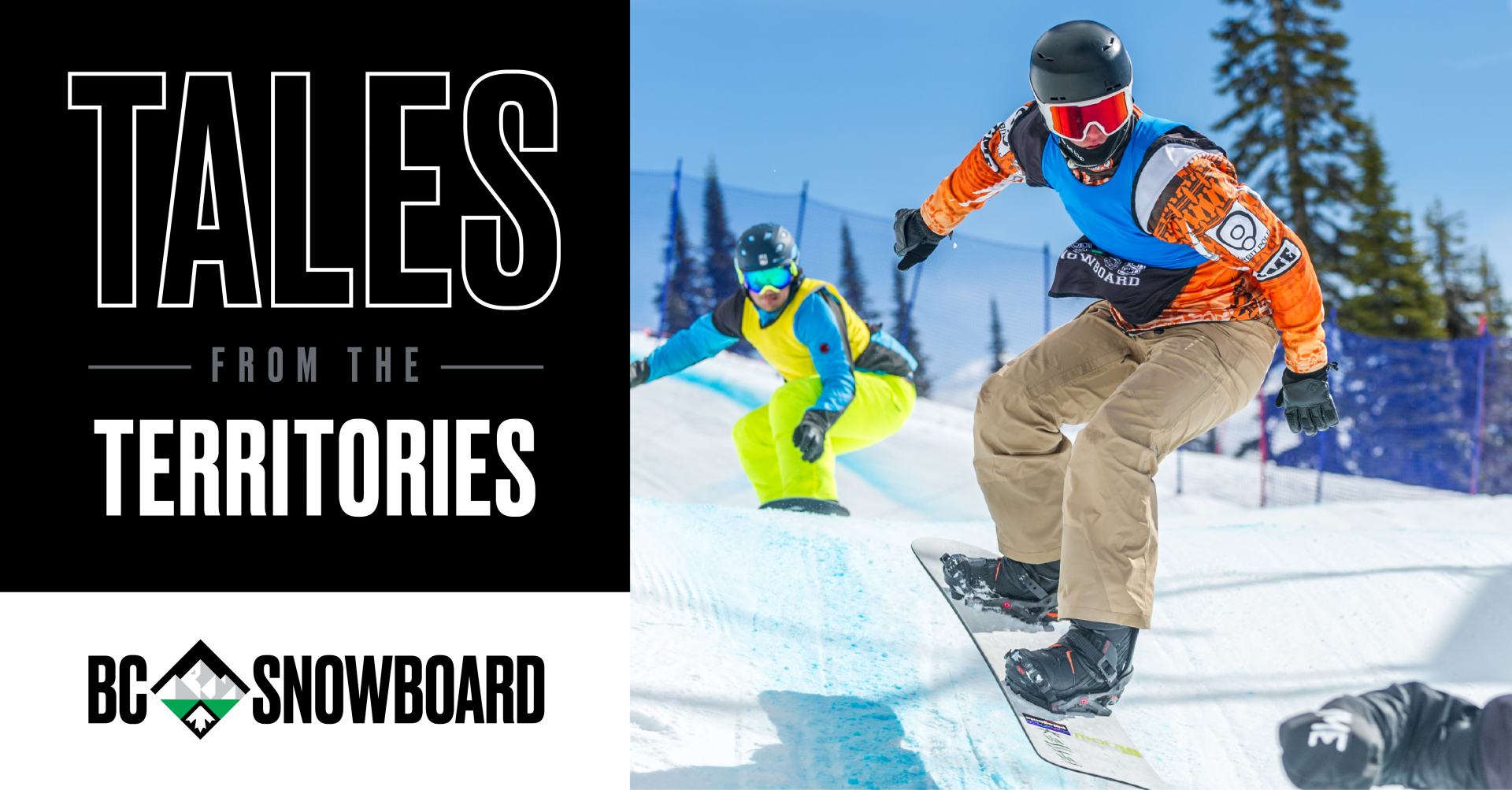 Cathy Astofooroff is the Executive Director of the B.C. Snowboard Association. Cathy is without a doubt the Matriarch of competition snowboarding in B.C. having been involved with the organization since the mid 90’s   as a volunteer, followed by investing countless hours, days, weeks, years into building sports systems and relationships in B.C, developing it to where it is today as one of the strongest Snowboard Associations in Canada. We spoke with Cathy about the pathways for SBX in B.C. We also grabbed some insight from her long-time friends, Michael J Ballingall, Senior Vice President of Big White Ski Resort, who are hosting this year’s Inaugural SBX World Cup right in her backyard and Chris Nakonechny, the head coach of the B.C. Snowboard Provincial SBX Program.

Cathy, at what age is the introduction of SBX in BC’ s pathway?

We believe there should be no discipline specific until Stage 4 of the LTAD…however it is usually obvious what the young athlete prefers. That being said, we have had athletes as young as 8 years old participate in our Open Age Group categories at the BCSB Provincial Series (This is a format designed by B.C. Snowboard  to ensure all athletes in the event get at least 2 runs in a Heat format).

How young do the kids programs start at?

The last 3 years have seen a very successful ‘Little Riders in School Program’, giving a very wide range of students an introduction to the feeling of snowboarding (Kindergarten to Grade 3). We have RIDERS Programs through Clubs and Snow Schools (hard to determine actual ages, but I’m going to say 10 to 13). Clubs have athletes from 6-7 years old in their training and local activities.

As mentioned earlier athletes as young as 8 years old participate in our Open Age Group categories at the B.C. Snowboard Provincial Series. The BC Provincial Team program starts at approximately 13 years of age.

Do many resorts provide programs for kids who want to get into SBX racing?

Which are the main supporting resorts of SBX?

Panorama – 2019 first year of high-level Camp and 2 NorAm events. 2020 this did not fit into our calendar, but we hope to be back. Sun Peaks – Home of the 2018 BC Winter Games – looking to do some inground building, snowmaking, currently just a fun course when conditions permit.

Do many resorts put in mellow SBX courses for kids and the general public to play in?

Big White has a fulltime track.

Whistler does later in the season

Sun Peaks based on conditions 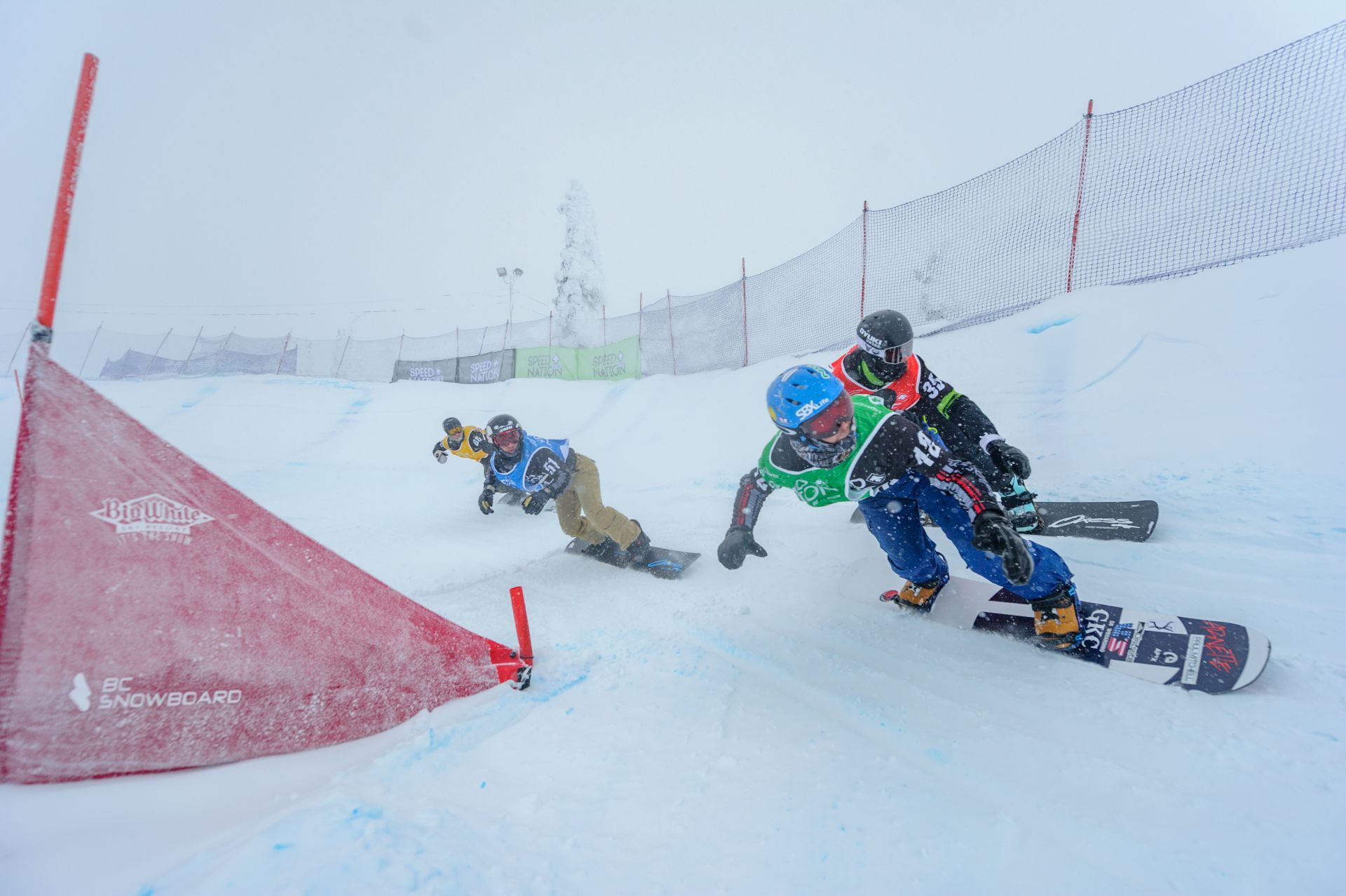 Are there any school programs in BC for SBX?

School programs generally focus on alpine riding as it fits in better with the ski programs that they run. There are no true Clubs in the school system for historical injury/law suits reasons. There are clubs that students sign up to, they do fundraising and have fun (outside of anything to do with B.C. Snowboard). There are snowboarders who participate in the annual Ski and Snowboard High School Championships, usually a GS type course, with a very wide range of skill levels competing.

Are the SBX specific camps for kids in B.C.?

Our SBX specific camps are open to all snowboarders.  We have been hosting SBX specific camps at Big White before the B.C. Snowboard Series events and other select SBX camps (last year a high level camp at Panorama after the NorAm events), with participation from other provinces and countries.

Where can the public access SBX clubs to start to get into racing?

SBX is a very expensive discipline for resorts to support!

Cathy: It doesn’t have to be, small public SBX tracks are valuable terrain for a resort to have as it helps develop skills and snowboarders (and skiers like the varied terrain). For example the Big White public track is always busy and sees a lot of younger kids and families using it on a regular basis. As well ski school instructors use it as an important teaching tool. The smaller resorts could benefit from having small public tracks to create varied fun terrain as well as having an opportunity for fun races throughout the season.

Michael J: The Big White boardercross track is our most popular run on the mountain. Mums, Dads, Friends, they get in there, side by side and they race down through the boardercross course and its really exciting. It was really important to have Telus as our partner because there is free Wi-Fi in the whole Telus Park area. They make a lot of films in there that they share on the internet. Just getting the kids able to shoot video, edit video, upload video – social feeds.  What we see coming out of that park on busy days, is not only a lot of people enjoying themselves, but a lot of people sharing their stories on their personal social feeds which really does us well to extend our brand and to invite more people to come to the mountain.

Are there B.C. development programs for SBX?

BC development programs are generally done through the drop-in camps that we will offer prior to the BCSB Provincial series events.

How does one get selected for these? Or are they open to all on a user pay basis?

BC Development camps are open to anyone and are done on a user pay basis.

Do you see increases in membership and participation specifically for SBX?

I think a good portion of our membership is due to SBX by having a successful Provincial SBX program. Our event schedule and clubs throughout the Province attract a lot of members to be involved with BC Snowboard.

Where are the main hubs for SBX in Canada?

In B.C. we currently see a lot of athletes come out of the Okanagan and Prince George/Smithers areas.  In the past Trail, Whistler and Vancouver have produced a number of athletes as well.

Are there many Alumni in SBX from B.C?

Yes, there are a lot of BC Alumni. Currently on the National Team - Tess Critchlow, Carle Brenneman, Meryeta O’Dine, Kevin Hill and on the Next Gen- Haili Moyer, Evan Bichon. Past notable Alumni include Maelle Ricker, Drew Neilson, Rob Fagan, Tom Velisek.

Why do you think so many good SBX riders have come out of B.C?

BC has the strongest SBX development program, in part, due to our ability to obtain and maintain provincial funding. This funding assists us with having full time coaches and IST staff running a 12 month periodized program and this support helps to reduce the costs to all athletes that are involved with our program. We have a very strong and dedicated coaching staff, with Chris Nakonechny as Head Coach, Meghan Hebert (former athlete) as Assistant Coach, Austin White (former athlete) as Jr Team Coach. 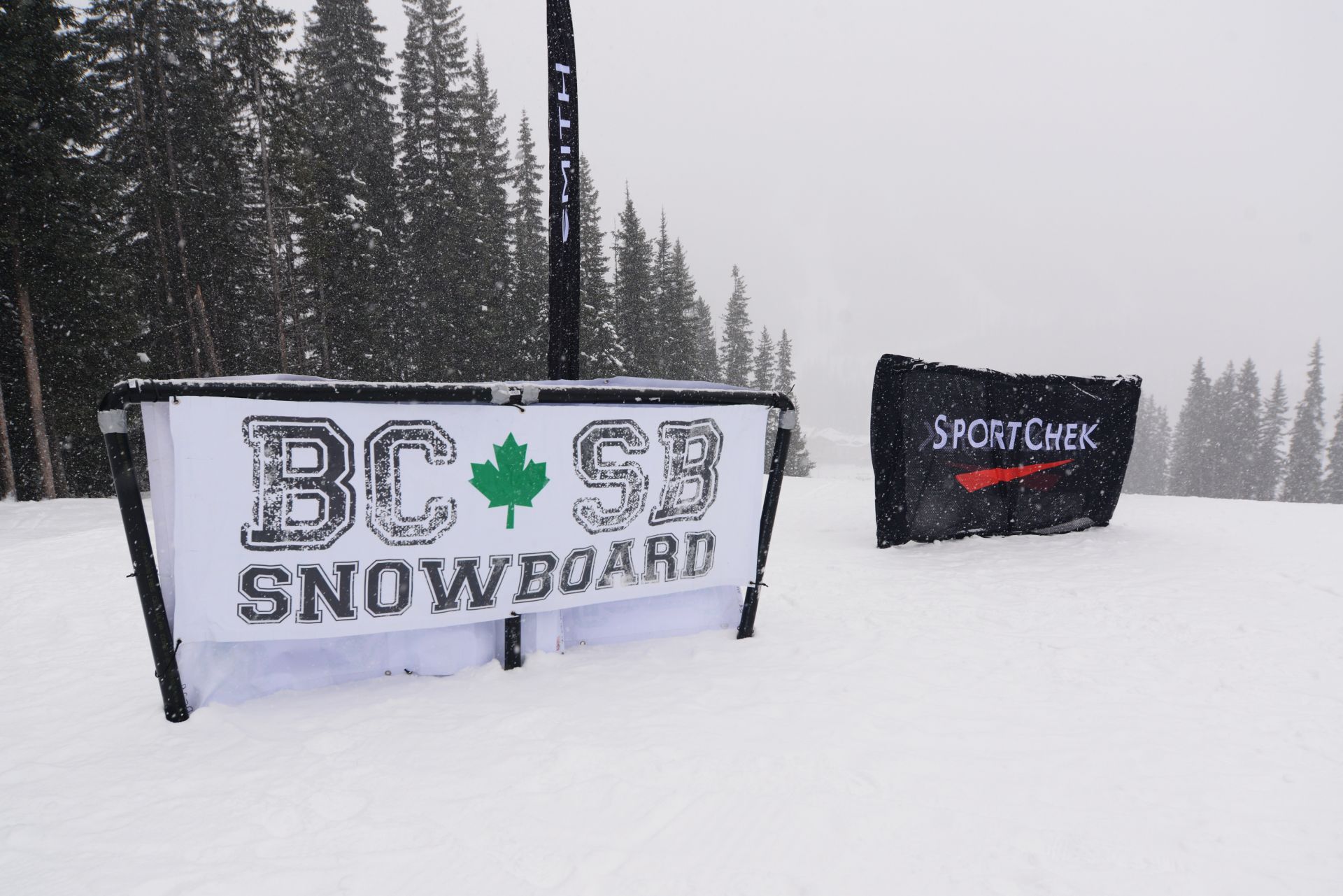 Where would you recommend people start to look for info on SBX in B.C.?

By contacting B.C. Snowboard as well as their local clubs. Attending the Camps and Events of the B.C. Snowboard Provincial Series is also a good start that way you will get to experience it firsthand and also get the opportunity to talk to coaches and other athletes. The BCSB Provincial Series is set up so new athletes can get involved and have fun while competing. We run the FIS event in the morning and the Open Age Categories in the afternoon.

How does the Next Gen team and National Teams work in SBX? Do they train with their National Coaches or Provincial – or both??

What more goes into SBX training? Is there a lot of off snow work as well as on snow and if so what?

There is a lot to preparing athletes to compete at a high level for SBX. We run a full dryland program throughout the summer which has a strong focus on a periodized S/C training program. We do a lot of nutrition, sport psych sessions throughout the summer to educate the athletes. Athletes regularly take part in various other activities to either work on skill development or fitness such as skateboarding, BMX, mountain biking.

Who is the real talent coming out of B.C. in SBX at the moment – who are the ones to watch?

The next up and coming BC athletes are Haili Moyer, Evan Bichon and Colby Graham

Do you guys have a coaching program there in B.C to bring good coaches through the systems?

Our coaching program follows the Canada Snowboard Coaching Program and we try to involve club coaches into our events and camp opportunities if possible.

We have Coach Development Coordinator, Meghan Hebert, to assist the coaches with their development and certification plans. 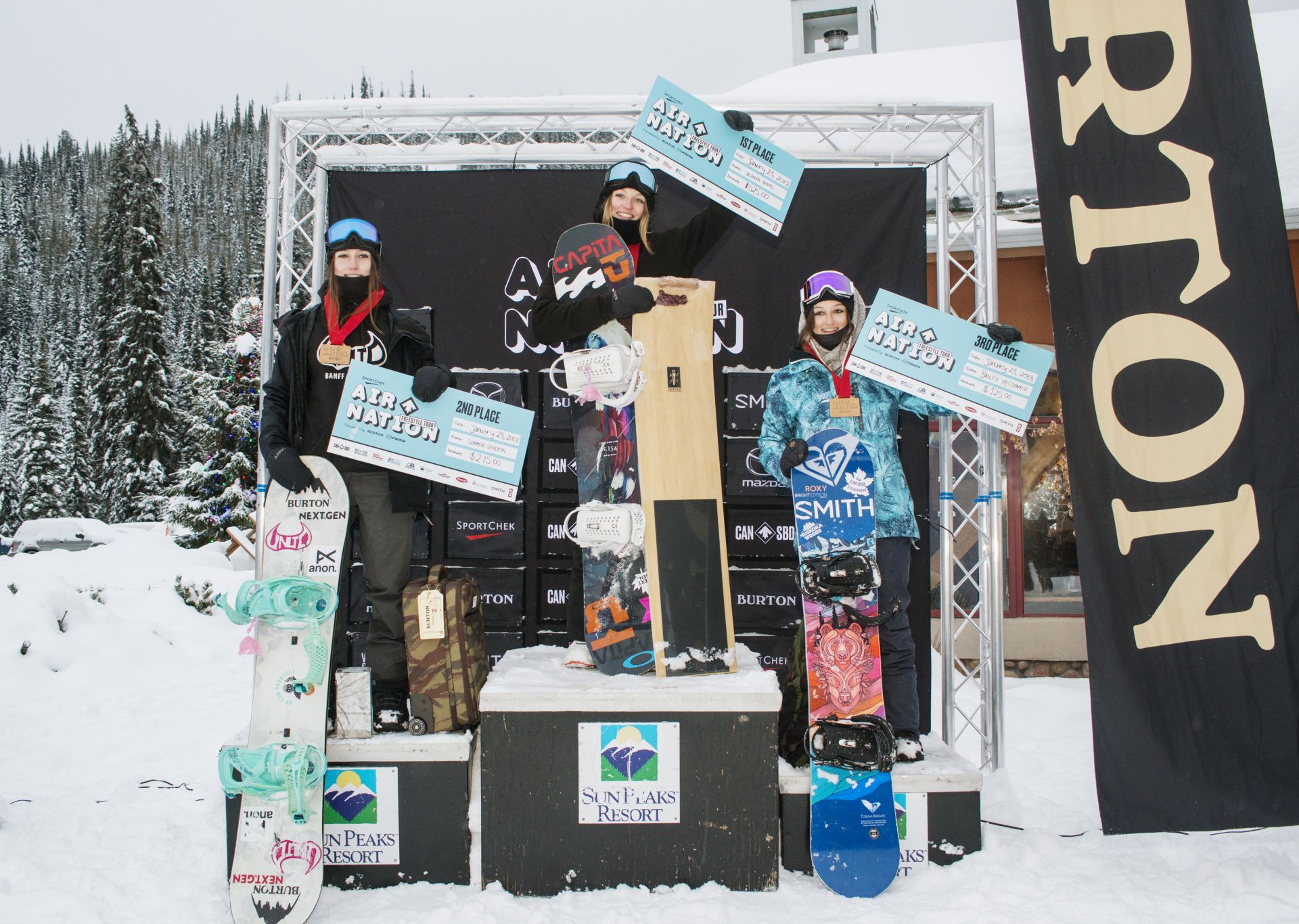 What does having a SBX WC in Big White Ski Resort do for the discipline in B.C?

Chris:  I think it is going to be great to have a SBX WC back in Canada and having it in BC is amazing!  It is going to put a spotlight on our discipline and hopefully by having the world’s top SBX riders at Big White will encourage local snowboarders to take part in the sport in the future. It is a great opportunity for the Province and Canada to be able to see what BC offers the SBX world both with our events and programs.

How do you manage the age groupings in B.C to increase participation?

Our format of sorting into gender and age appropriate groups has allowed athletes to get a taste of the sport.  Our Open Age Categories format consists of a last chance qualifier and allows every athlete to participate in at least 2 runs in the SBX heat format. This has proven to be a good platform to learn the skills of SBX prior the athletes being old enough or experienced enough to move to the more competitive FIS category. Many athletes have come through this format – Kevin, Tess, Meryeta, Chris Robanske, etc. – just about all of them!

We are specifically talking SBX pathways, due to the focus on the World Cup in Big White, but just so no one thinks B.C. Snowboard is SBX specific, what other offerings will we be able to catch up on in further Q&As?

BC Snowboard also supports Slopestyle and Big Air, with that being the main focus of the club programs.  We host 4-6 events per season (Whistler Blackcomb, Big White, Lower Mainland).