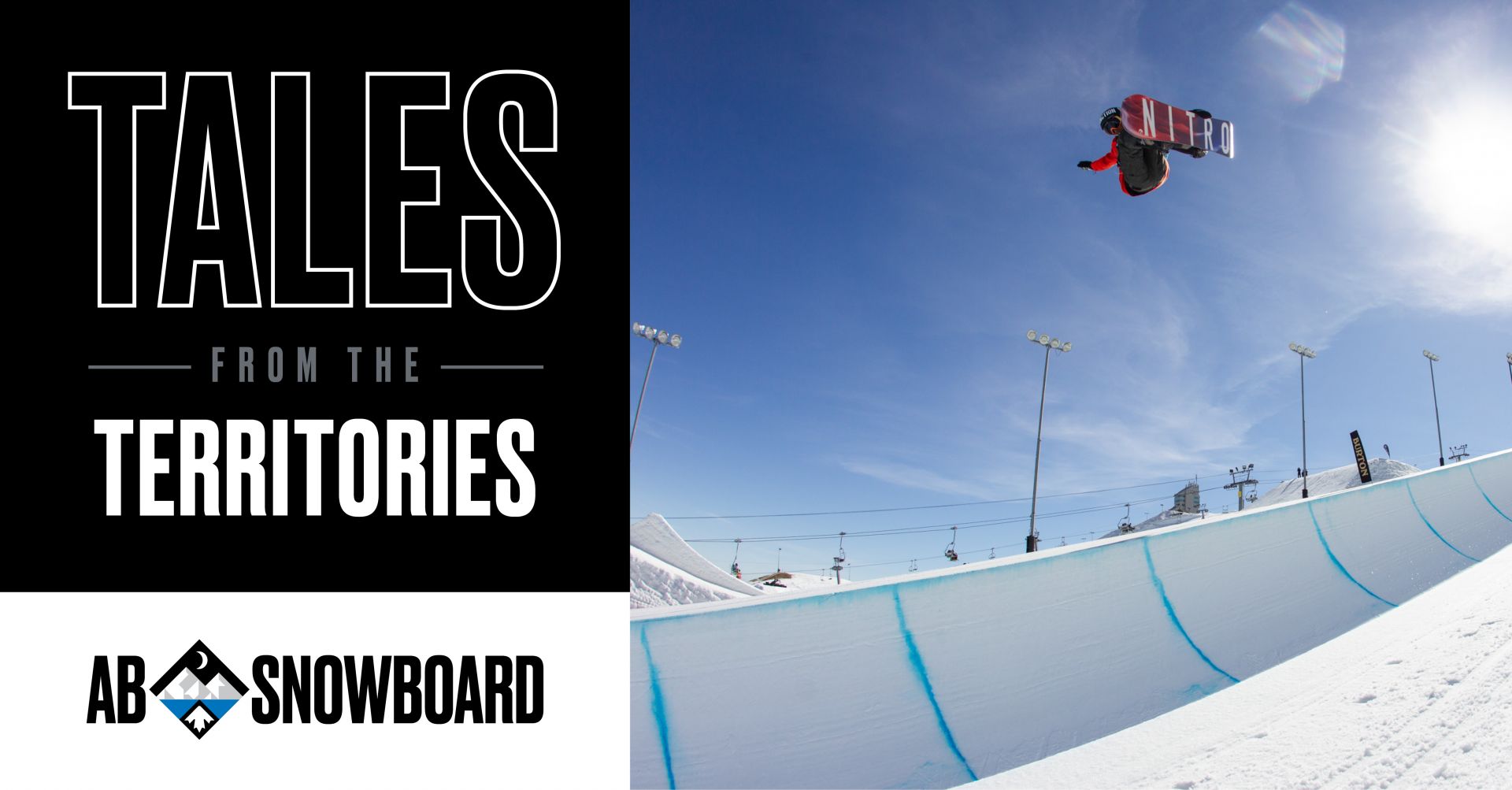 Calgary, Alberta is home to one of the World’s best halfpipes and the facilities create perfect training opportunities for young kids to develop their skills. We have taken the time to chat with Director of Operations at Alberta Snowboard, Stacey Burke-Hicks about what makes Alberta the perfect province for halfpipe development.

What do you have available for groms to get them riding pipe?

The Groms here have the Grom Series events to get them out and competing for sometimes the first time in mini pipe and mini slope and mini race. Often, we get light sabres for the kids that are awarded by a Jedi or storm trooper when they do a cool trick... The Jedi's are often the next gen or national team.  (photos available) We have 90 plus kids at the events from 3-12. Winsport has been amazing at donating the space for the hours so we can ensure that it's accessible for all in sport development.

How young do the kids programs start at?

In Alberta historically our largest club Riders on Board starts their club kids as early as three years old. With nearly 100 kids under the age of 9 in programming, as these kids grow over the course of the next 5 years and the amazing facilities put in place at Winsport the future certainly looks bright.

Are there camps for the younger kids to ride with the older ones?

We run a family jam at Nationals and a Pipe fest where we get kids of all ages out riding together.

Can you ride pipe as a school sport?

So far, we don't see a ton of school teams yet, but there has been some interest in this avenue.

Are there development squads? Clubs?

Do you guys have a coaching program there in Alberta to bring good coaches through the systems?

Many of the Canada Snowboard Program coaches over the years have come out of the Winsport program Mike Stastook and Chris Witwicki.

Do most of the top Canadian Pipe riders come through Alberta and are the numbers growing?

Pipe has always been pretty strong in Alberta, but it definitely has had its up and downs over the years as far as participation, I would say it’s climbing back up. Transition skills are so vital to have in your overall toolbox these days. I would suggest that Slope at the last Olympics was won on a transitional feature. The riders with the most fundamental skills in my opinion are the kids with pipe backgrounds.

Can all of the riders use the WIN SPORT training centres?

Yes and No. It is a bit of a common misperception that Winsport blocks other clubs or teams from some of their resources. This isn't true, they require the correct certification for insurance reasons for all of their areas. In the future, once the Air Bag is up and running, coaches will need to have Air Bag training to get their athletes on the air bag unless they are willing to allow their athletes to work with Winsport coaches that have the right certification. When camps are running in certain areas the Winsport or national team athletes have paid into their fees to be a part of those camps, sometimes a lot of money. They are not able to put athletes from other clubs into the camps without the willingness of the club to pay the same fees. These fees that National team ski and Snowboard and funding goes to pay the tremendous upkeep for the pipe and allows others to actually have a pipe at different times of the year. The PTC gym - same thing - you need to be with a certified trainer. All of these things are to keep the athletes safe ....

Are there Acro programs in Alberta? Are there dryland landing bag facilities?

We do have Acro training in Alberta. Trampoline regulations have been getting tighter and tighter and we need to do everything we can to prevent the injuries on tramp that we have seen in the past prior to our coaches having any training or understanding in this area. Freestyle ski has certified the snowboard coaches to perform the training in the recent years as they are far more developed in this area but we are fortunate to have a coach like Josh Duncan who is now a facilitator for the Air Program and has a deep background and understanding in acrobatics leading the way, he has certainly helped the National/ Next Gen pipe team kids with aerial awareness amongst other vital skills.

Bernie Asbell at Winsport was instrumental in getting Winsport Dryslope and Air bag in the works. It was supposed to be launched this summer but there was a whole lot of red tape and dirt work issues that arose, delaying the project until next summer. But when it opens it will most definitely be a game changer for all of those up and coming athletes.

We are also fortunate to have the National Sports school located at Winsport COP which helps allow the athletes the ability to be on hill and travel and still get their education. Plus being with like-minded athletes is huge to staying in sport.

Do most of the top Canadian Pipe riders come through Alberta?

Currently the majority of the National and Next Gen team for Pipe has come out of Josh Duncan's pipe program at Winsport. Between his ability to train air awareness and his knowledge of basic fundamentals, Josh is one of the most technically sound coaches I have seen. He has an approach that is pretty great that he really tries to figure out how to work with the individual athlete. He's a solid dude and he's a super solid rider too, even in his forties can still drop a solid Crippler 7 in the pipe (The Duncan roll)

How does the Next Gen team and National Teams work at COP? Are they there with the National coach most of the time or do they train with each other as a crew?

The Next Gen and National team are mostly here but the National team coach is in based I think in Arizona. So often they travel to train with him. I think they are working on a better system so they work with Josh when here and the travelling kids work with Slaughter when they are away but that is a question for HP.

What makes Calgary, Alberta the perfect place to learn to ride pipe?

The raddest thing about Alberta hills is they are open to ride at night. Kids can go to school and still rip every night if they want to. This is not a good idea with young growing bodies, but the facilities definitely enable this - so if they want to - they can ride every day. The pipe often gets weird light, late in the day, so night training is sometimes preferred. Shawn White used to regularly show up to train here under the night lights. He would ride in the morning and perfect the tricks at night. A lot of the super shreds like to train here because usually Canadians are nice and don't bother them that much. The fast lap time at Winsport is really beneficial and the epic mountains aren't that far away either. So, on the weekends you can go bomb the Men's Downhill and work on speed and edges at Lake Louise or head to Sunshine and hike to work on some Wildcats into powder and then take it to the park at Winsport during the week.

I think for kids it is so key to have those basic turning fundamentals to really get to ride pipe. Work on going fast and those CASI turns. These days kids love the easy way out, reverse camber and buttering on to rails. Not saying that there isn’t skill in rails, just that they take a lot less of the fundamental skills. Bud Keene is a great person to talk to about that one. I think he might have a podcast somewhere about it...Learn to really snowboard first... ride everything.

Are there any Canadian Alumni involved with the programs in Alberta?

Who do you see as the real hot HP talent coming out of Alberta for the future?

Brooke D'Hondt is the next big talent coming out of Alberta without question. She is driven and focused far beyond her years. She won the Jr Jam at the US Open by 30 points. Her folks are doing all the right things to get her in the right places with the right coaches.

There are some other amazing riders coming up as well. Dane Menzies is an amazing multi-sport talent and landed a double first try Friday last season at 14. Tyson Lewis is right in that mix too, multi-sport kid, a ton of talent

Kamilla Kozuback is a girl I would put money on to do great things as well. She is tough as nails and a driven multisport talent. And there are these Grom brothers Blake and Trey Montavello that are incredible athletes, they surf, skate, BMX and snowboard all insanely well at 11 and 12 they are going to be ones to follow and watch.

What does being the host of the Snow Rodeo Halfpipe World Cup in COP do for the discipline in Calgary?

I think that the World Cup in Calgary shows kids the possibilities, at least it did for me back in 1995. It showcases our sport and gets people excited to meet their Heroes. The pipe athletes have been so tremendously accessible, it has been awesome for the development of the sport.

How do kids and families across Canada find out about getting involved with Pipe programs in Alberta?

If people wanted to learn about Pipe programs in Alberta I suggest that they pop me an email at admin@albertasnowboarding.com. Everyone who knows me knows I will talk halfpipe riding till I am blue in the face. It is my first love. Nothing like a perfect method day in the pipe.