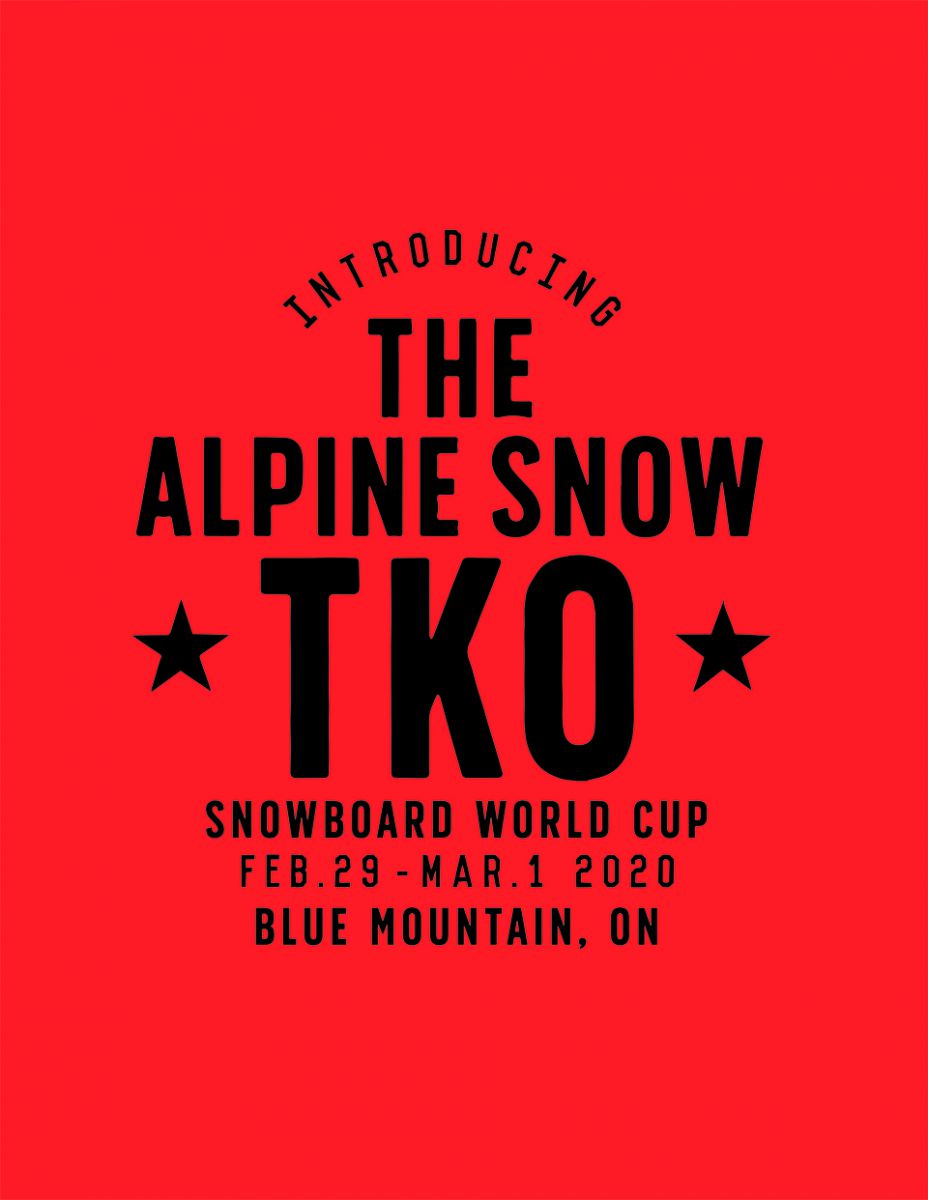 The Alpine Snow TKO PGS, PSL World Cup at Blue Mountain Ski Resort will make its inaugural debut on February 26 - March 1, 2020. This will be the first Alpine PGS World Cup in Canada since Stoneham 2012 and the first PSL since Whistler 2002. Both Alpine snowboarding disciplines featured in the World Championships in 2013 in Quebec.

Jasey-Jay Anderson, Olympic Gold medalist and the first Canadian to compete in six Olympic Games said, “It is a big accomplishment to have an Alpine World Cup in Canada.  Our sport is predominately gravitated in Europe and there hasn’t been a major Alpine Snowboard event in North America since the World Championships in 2013.  We compete in a niche to borderline underground discipline that evolves mostly through its exposure to young talents.  By far the best way to expose our sport to this talent is through WC. Putting on this level of event is a feat, years in the making with care and vision for the future at heart.  Riding to that level, at 44, is a privilege to be part of the team inspiring future generations.”

Seb Beaulieu, National Alpine Team athlete said, “The new Word Cup rules state that you can’t train on the race slope 5 days prior to the event. Most of the time our first run at a new World cup is usually our first run on the race slope. Where athletes from the host country have already trained multiple times previously on it! Hosting our own World Cup gives us the chance to race on the slope that we know really well and with the added energy from the crowd there’s no doubt a big advantage! its actually huge!"

Dustin Heise, Executive Director of Canada Snowboard said, “We have a huge season ahead of us in 2019/2020 with seven World Cup title disciplines – 14 podiums across both genders hosted in partnership with many Provincial Members of Canada Snowboard. Alpine Snowboarding is such an exciting and spectator friendly snowboard discipline with a long and special history here in Canada. Blue Mountain is such a fantastic resort to host both of the Alpine Snowboard World Cup disciplines as we will have a great place to showcase this spectacular event.  A special thanks to all who have made this key FIS World Cup a reality, including the Government of Canada, Government of Ontario, and our partners at Ontario Snowboard. We look forward to a great Event in 2020."

Michael Tibollo, Minister of Tourism, Culture and Sport said, “I am proud to welcome fans, coaches and athletes from around the world to Ontario for the Alpine Snow TKO. With funding support from the Ontario Sport Hosting Program, Ontario Snowboard will host one of the top alpine snowboard competitions at the Blue Mountain Ski Resort — providing an economic boost to Collingwood and the Town of the Blue Mountains as our snowboarders compete on the world stage cheered on by their families and friends. Thank you to the organizers and volunteers, and best of luck to all competing athletes!”

(PSL): Parallel slalom debuted at the Olympics in 2014 in Sochi, Russia. Boarders race downhill through sets of gates that force extremely tight and quick turns (spaced 8–15 meters apart), requiring plenty of technical skill while racing against an opponent in the other course.

(PGS): The parallel giant slalom event includes two evenly spaced courses (10–15 meters apart) with vertical distances of 20–27 meters between turning gates, allowing speeds up to 70 km/h. Once qualifications are complete, racers are placed in a head to head knockout format, starting with 16 athletes and moving to a final race for 1st and 2nd. It uses a much longer course than parallel slalom with gates set further apart (spaced 20–27 meters apart), resulting in even higher speeds, while racing against an opponent on a similar course place parallel to the other course. Parallel giant slalom is an Olympic event, and the FIS organises a world tour and world cup for this event.

Canada Snowboard is the national governing body for snowboarding in Canada.
Canada Snowboard is committed to high performance excellence in FIS World Cup, World Championships, World Snowboard Tour and Olympic & Paralympic Winter Games competition. We are supported by valued corporate partners including Burton Snowboards, Zanier Gloves and Mazda Canada, along with the Government of Canada, Own the Podium, the Canadian Olympic Committee and the Canadian Paralympic Committee. Canada Snowboard also provides a wide range of programs and support services based on the established principles of Long Term Athlete Development (LTAD). For more information on the services and programs offered by Canada Snowboard, visit: www.canadasnowboard.ca

Canada Snowboard is proud to announce the hiring of a new technical Coach to its National Alpine Program.