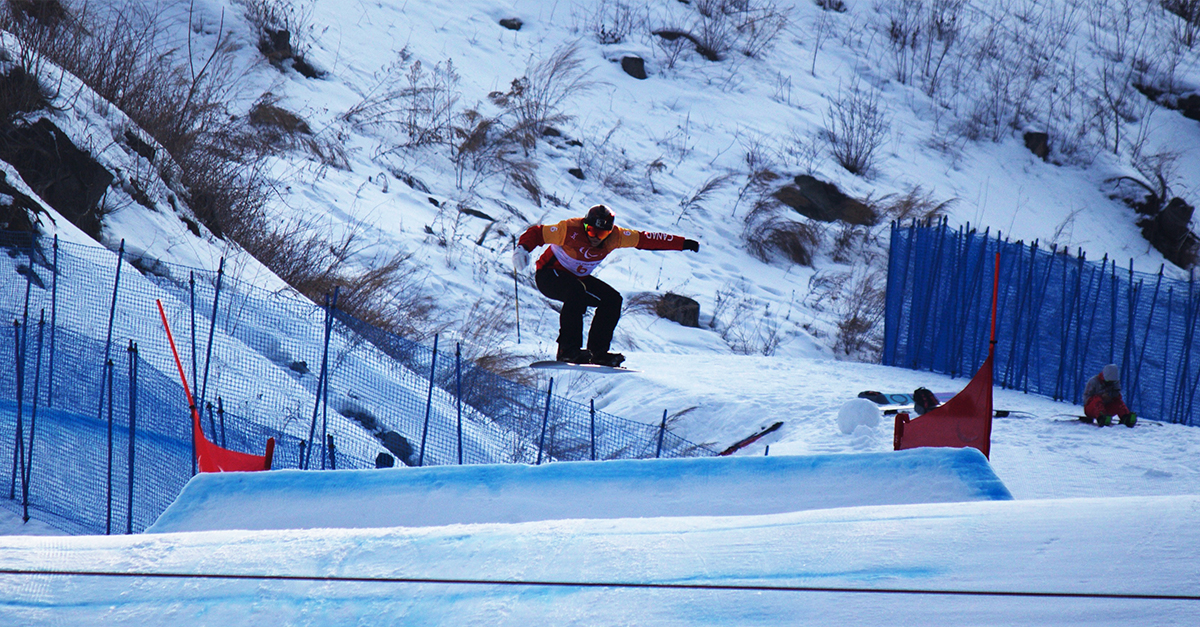 The Canadian Paralympic snowboard team is excited to get their PyeongChang 2018 competition schedule underway, and to have the chance to showcase their sport at the Winter Paralympics for only the second time in history.

Making its debut in Sochi 2014, snowboard-cross will be joined by banked slalom as an additional discipline to the PyeongChang 2018 program, and Canada has sent its largest Paralympic snowboard team to South Korea with seven riders taking part in both medal events.

Part of Canada’s first Paralympic snowboard team, Michelle Salt (Calgary, AB, Women’s LL-1) and John Leslie (Arnprior, ON, Men’s LL-2) will be leading their countrymen and women into competition, hoping their experience will benefit both their performances and that of their fellow riders. Salt had a fantastic season, grabbing bronze in both snowboard-cross and banked slalom at various World Cups on her way to grabbing third in the overall Crystal Globe Banked Slalom standings.

“I was really grateful for my experience in Sochi because I think now that I was able to go and experience the Games and the stress, as well as the focus needed, I’m able to apply that to these Games and hopefully do my best.” – Michelle Salt

“Having a little bit of experience doing this once before plays a big part. Being a little bit of a leader, and being with a new crew of snowboarders coming here we’ve been able to feed off each other’s excitement and experiences and I think altogether we are looking forward to showcasing our sport for the second time.” – John Leslie

Alex ‘Bubz’ Massie (Barrie, ON, Men’s LL-2), a two-time X Games medallist in adaptive snowboardcross, is hungry to attack the course at his first-ever Paralympic Winter Games. Competing in the men’s LL-2 category, he took home his maiden career World Cup silver medal on home soil at the Big White 2018 World Para Snowboard World Cup Finals. Alex will be bolstered by the appearance of several of his family members, who made the trip to South Korea to watch him compete.

“Definitely got a little bit of a confidence boost with that silver medal back in Big White but I’m not thinking about that. At the start of the game it’s always 0-0, any given Sunday you either win or lose, whoever wants it the most is going to get it. Just trying to do my best and make everybody proud back home.” – Alex Massie

Curt Minard (Vernon, BC, Men’s UL) is enjoying easily the best season of his career. After medaling at the official PyeongChang 2018 test event World Cup last year, the men’s UL participant took bronze at a World Cup in Finland, before storming away with a silver, the first of his career, at last month’s Big White 2018 World Para Snowboard World Cup Finals. This allowed Minard to grab second in the overall Crystal Globe standings for snowboardcross.

“I am absolutely so happy to be here and be a Paralympian. I am looking at this process going forward that everything from here on in is a bonus. It’s just an extreme honour to represent Canada and I want to do everyone proud back home, so that’s what I’m stoked about heading into the Paralympic Winter Games.” – Curtis Minard

In 2016, Andrew Genge (Oshawa, ON, Men’s UL) medaled at the first World Cup he ever competed in. Since then the Oshawa native has been on a tear in the men’s UL category, grabbing podiums and top ten results all over the globe since being named to the national team. Coming fourth at last year’s snowboard-cross test event, Genge is optimistic heading into PyeongChang 2018.

“My goals and expectations are to feel out the atmosphere, get some good experience at competing on the world's largest stage and if I get a medal, that's a bonus. It's a real honour being a Paralympian and I'm really proud to be representing my country. It is a real testament to how hard I've worked to get here. My sister always said as I was going through rehab to ‘Train like an Olympian’ and now I am a Paralympian!” – Andrew Genge

As part of their first full year following the national team program, it’s hard not to cheer for Colton Liddle (Wawa, ON, Men’s LL-2) and Sandrine Hamel (Saint-Sauveur-des-Monts, QC, Women’s LL-2), the latter of whom has had several top five results, and barely missed out on her first podium by less than half a second earlier this season. Liddle also continues to improve his World Cup ranking in the highly competive Men’ s LL-2 category.

"On a base level I think my expectation is to gain some experience on the world circuit. During the Games we are still racing against the same field. It's a special event, not everyone has the chance to attend so I'd love to just go for it and gain that experience." - Sandrine Hamel

“These are my first Games so I'm keeping my expectations low but I'm looking to achieve results that make Canadians proud. I'm hoping to leave these Games happy and full of memories!” – Colton Liddle.

To cap off the World Cup season, Canada also took home the bronze medal in the Nations Cup, the first time that the country has ever podiumed in the Cup.

Snowboarding will kick off its second-ever Games appearance with snowboardcross on March 12 KT (March 11 in CAN) and banked slalom on March 16 (March 15 in CAN) at the Jeongseon Alpine Centre.