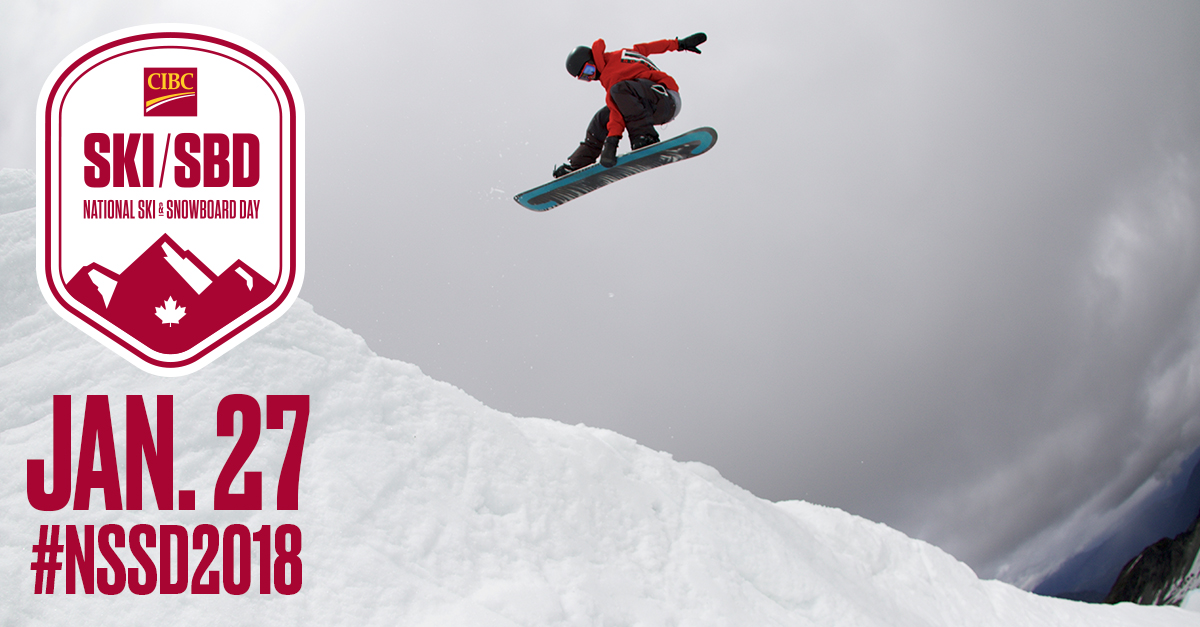 From Yukon Territory to Newfoundland and Labrador, 18 ski and snowboard resorts across the country have partnered with these best-in-class National Sport Federations to offer discounted lift tickets and onsite guest experiences, encouraging Canadians to get outside and explore the beauty of skiing and snowboarding, which are deeply rooted Canadian sports. To view all resort offers, visit hittheslopes.ca.

“We’re extremely proud to work with our resort partners and our friends at Alpine Canada & Freestyle Canada to celebrate National Ski & Snowboard day. Winter and snowsports are an important part of our collective Canadian identity, and we’re excited to share our passion for snowboarding with millions of Canadians from coast to coast”, said Patrick Jarvis, Executive Director of Canada Snowboard. “We invite all Canadians to head out to their favourite ski resort on January 27th to celebrate the joy of snowboarding and skiing, and to show their support for our world class athletes.”

“Alpine Canada is thrilled to expand our annual CIBC National Ski & Snowboard Day campaign in partnership with Canada Snowboard and Freestyle Canada,” said Alpine Canada’s Vice President, Partnerships, Linsey Ferguson. “The inclusion of alpine, snowboard and freestyle skiing, truly encapsulates the full spectrum of quintessential Canadian snow sports.  We look forward to welcoming you on January 27th to one of our great Canadian resort partners and thank you for your support of our national team athletes”.

“We invite all Canadians to join us once again on CIBC National Ski & Snowboard Day to enjoy our great outdoors in support of our Canadian alpine and para-alpine team.” says Monique Giroux, Vice President, Sponsorships, Communications & Public Affairs, CIBC. “With the Paralympic Games in 2018 taking place this winter, there’s no better time to experience this quintessential Canadian pastime and rally behind our incredible para-alpine athletes as they get ready to represent Canada on the world stage.”

"Winter and skiing are synonymous with Canada and CIBC National Ski & Snowboard Day is a way to bring Canadians to snow resorts across the country so they may experience winter as it is meant to be," says Bruce Robinson, CEO of Freestyle Canada. "The partnership between freestyle skiing, snowboard, and alpine skiing demonstrates our collective desire to grow winter sport through snow sports participation. Our organizations' partnership with the Canadian Ski Council will showcase the pride our athletes have at representing Canada and tie back their athletic success with where it all began ... the local ski and snowboard hill. Join Canada's snow sports athletes as they celebrate CIBC National Ski and Snowboard Day on January 27th."

Whether you’re a seasoned mountain explorer or completely new to the sport, CIBC National Ski & Snowboard Day is the perfect family-friendly reason to get outside this winter. With an estimated 2.5 million skiers and snowboarders in Canada and approximately 275 ski areas to explore, it’s no wonder hitting the slopes is one of Canada’s favourite ways to brave our winters.

“Canada is a winter country and Canadians were not meant to hibernate,” says Paul Pinchbeck, CEO of the Canadian Ski Council.  “Skiing and snowboarding are the greatest family oriented winter sports and a key opportunity to get outside and be active in winter.  Our winter sport athletes are heroes who can be looked up to and can help inspire new people to take up snow sports.  This new partnership between Canada’s resorts and the alpine, freestyle and snowboard teams is an opportunity to engage the nation in a celebration of winter sport.  We look forward to welcoming skiers and snowboarders, whether existing or new, to Canada’s resorts on National Ski and Snowboard Day.”

To explore a resort offer and experience near you, visit hittheslopes.ca

About Alpine Canada
Alpine Canada is the national governing body for alpine, para-alpine and ski cross racing in Canada. With the support of valued corporate partners along with the Government of Canada, Own the Podium and the Canadian Olympic Committee, Alpine Canada develops Olympic, Paralympic, world championship and World Cup medallists to stimulate visibility, inspiration and growth in the ski community.

About Freestyle Canada
Since 1974, Freestyle Canada has been developing Olympic and World Champions in the freestyle disciplines of aerials, moguls, halfpipe and slopestyle skiing. With the support of our valued corporate, private and government partners, we will continue to build on our rich history of success, delivering freestyle skiing programs that inspire athletes from all across Canada to harness their courage, go for their dreams and become who they aspire to become. For more information, please visit www.freestylecanada.ski.

About Canada Ski Council
Founded in 1977, the Canadian Ski Council is a national, not-for-profit ski and snowboard organization whose mandate is to increase participation in recreational skiing, snowboarding, and cross-country skiing in Canada.