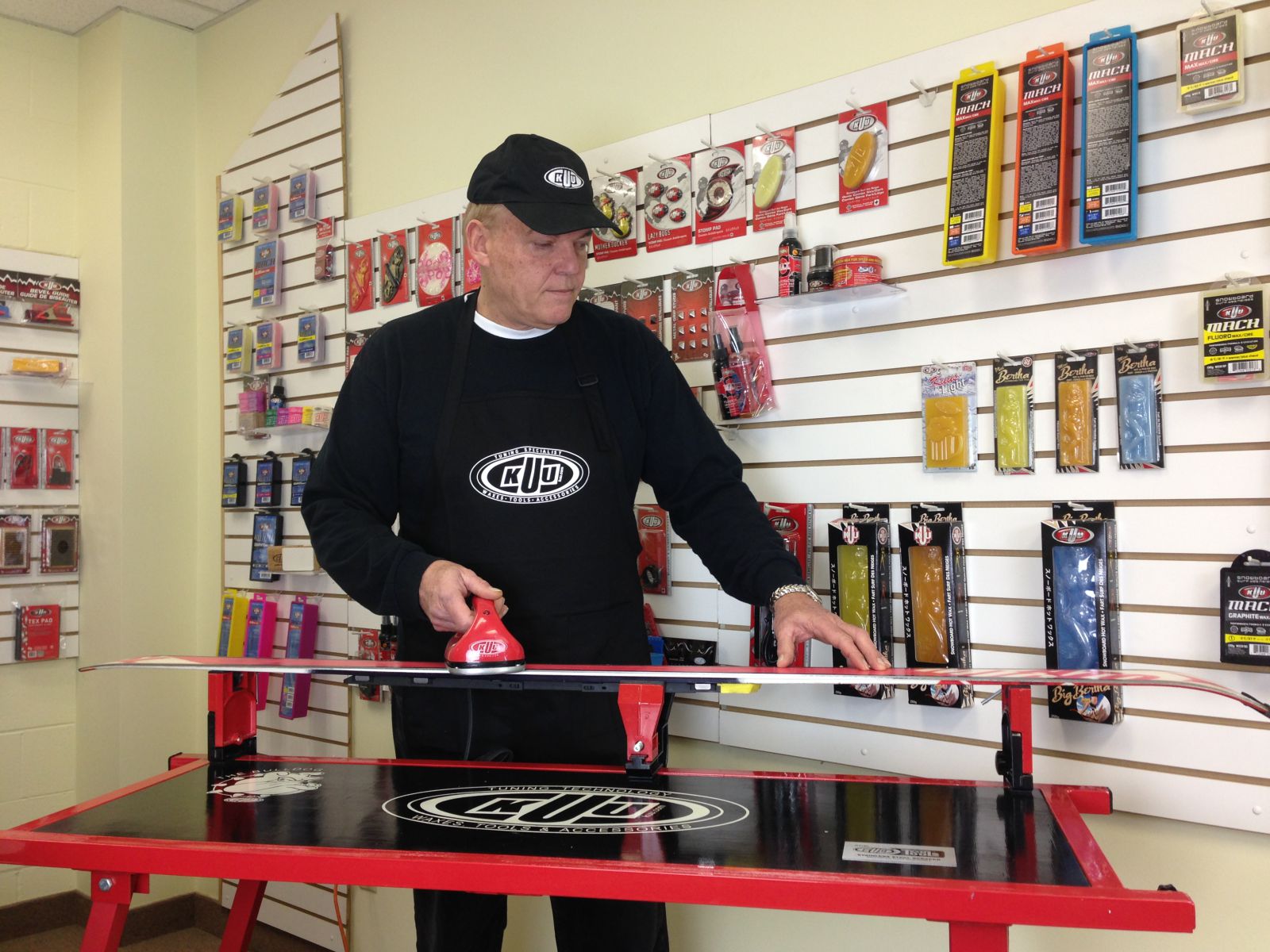 How did KUU start?
I used to compete competitively on the FIS ski circuit world-wide back in the late 70s and early 80s. I loved the competition, challenges, thrill and being out on the slopes. My father had invented the World’s First Electric Ski waxing iron with patents in Canada and the USA. The electric waxing iron was the seed that started the idea of starting KUUsport. My father passed on when I was young but I thought maybe one day I will produce the iron and other accessories. I had graduated in a Mechanical Technology program before I started to compete that gave me a lot of knowledge about metallurgy and designing. My father had a machine shop and at an early age I was working in the shop with laths, milling machines, welding and other aspects of a machine shop. After ski racing when snowboarding had yet to show its face, I took courses on Business Administration as I wanted to start my own business. In 1984-5 I had started KUUsport. I was a fanatic in tuning and mostly due to my background in the machine shop. From all my experience in tool making and race experience I knew what was required to look after your equipment. In my start up years my partner Heidi helped me out with many aspects of the business (and still does today).  She has her degree in chemistry and headed up the wax development.

How did Kuu get involved with snowboarding?
When I started KUUsport I was fascinated by the new snowboarders coming out on the slopes. I recognized they were going to have to learn how to get the most out of their equipment so they could have the best day possible on the slopes. You can’t carve on ice or hard packed snow with dull edges! If you want more “flight” as the saying “Go Big or Go home” suggests, you need a quality, resilient glide wax. I started speaking to some of the guys prepping for a jump and said with some good wax on your board you will glide quicker in a shorter distance and thus be able to maximize your flight and height. I started helping out other riders and in particular the competitors. I was fortunate as many snowboarders that became some of the top riders in the world were from right here in Ontario. I passed on a lot of information and knowledge on how to “Max your board out”. When many of the industry big guns did not believe in snowboarding and thought it was just a fad, I thought differently.

As an aside, let me tell you about my very first experience on a snowboard. I heard of a local snowboard race coming up on the weekend. I went to a local shop and borrowed a snowboard. I tuned it up the night before and thought to myself “I am going to crush this race and win”, even though I had never been on a snowboard before in my life. Well I showed up at the competition and I knew many of the riders and they were surprised that I was going to race as they knew I was a skier. So I get my bib and off I go on the slope. Get off the chair … crash. Ok, maybe I just wasn’t paying enough attention. I get up.  2-4 turns and again, crash! Ok, let me think this out a little more. I realize, I need more speed! So off I go to get warmed up. I get a few turns in and start to pick up speed, now comes a real crash! At lunch the other guys were asking me why I never showed up at the start. I told them I went over to the bunny hill to figure it out and told them my story, they all laughed and that was my first day experience. I could see the fun these riders were having and knew snowboarding was here to stay and I liked it as well.

We then started developing the world’s first line of snowboard waxes, tools and accessories under the brand KUU. You have to like/participate in something in order to progress and evolve.

We see that KUU used to manufacture snowboards. How did that come about?
I enjoyed the snowboarding scene and sport as it started to surface in the industry. The business was already set up and knew that we could manufacture snowboards from scratch. I knew of other people who were experimenting with snowboards and spent time with several different people across the country and in the US. We figured out the type of presses we required, jigs, cores and bases. I already had a lot of knowledge on ski construction and base materials as we had to know what the bases were made of in order to develop some of the fastest waxes in the world. I was already dealing with the epoxy resin companies that supplied these products to the ski industry and knew they would work in the construction of snowboards. When I analyzed the current construction of snowboards on the market, I realized that full wood core construction was the way to go for the core. Another worthy note was our graphic designer Darwyn Cooke who made some amazing prints and graphics for us. Darwyn was a Canadian Eisner Award-winning comic book writer, artist, cartoonist, and animator, known for his work on the comic books Catwoman, DC: The New Frontier, The Spirit, and Richard Stark's Parker: The Hunter.

In summary, we had the knowledge the understanding of the manufacturing direction.  We understood what made a snowboard perform exceptionally well.  We had a great team of local riders and implemented their input, and we had a lot of passion throughout the entire team. KUU boards did fantastic; we sold well in Canada and exported to many countries including the U.S, Japan, and many countries in Europe. It was fresh ground with still limited players. Eventually, many players joined in on the frenzy of the snowboard market. I knew if the big ski companies joined in, the game would get tough.

In the 90s there was an explosion in the snowboard industry, all the big players joined in. We saw the prices of snowboards plummet as the major ski manufacturers went after a big market-share after being behind the 8 ball. I was careful to not let our ego, or sheer passion for the boards, get in the way of the profitability of the business. I then had a US company offer to purchase our production facility and felt it would be a smart move. I second guessed myself on the closure of our snowboard division many times before actually following through. Just a couple of years later about 100 snowboard manufacturers worldwide filed for bankruptcy or closed down. In hindsight as a business we made the right move to close the snowboard manufacturing side down.

What separates KUU from other Wax brands?
Our wax development over the years has received a lot of input from our snowboard and ski connections. We are proud sponsors of Canada Snowboard, Alpine Canada and the Austrian Ski Pool. We have done countless hours of wax testing (both ours and our competitors) to come up with waxes that can win at any level of competition. Our MACH series of waxes was a major breakthrough in wax technology. In essence, we figured out a way to coat the hydrocarbon atom. This MACH coating provides a wider temperature range for the wax to perform in compared to our competition.  MACH outperforms straight hydrocarbon waxes for durability and provides faster glide… the perfect combination. A comparison would be like the Smarties candy, chocolate on the inside with a candy coating. Our MACH wax, is a hydrocarbon wax with a MACH layer/coating that works incredibly well for a snowboard and a ski.

Why did KUU decide to team up with Canada Snowboard?
Easy answer here. I am Canadian! I give back to the sports that have provided me with opportunities and both Heidi and I are proud and pleased to do so. We want Canadian riders to be a force to be reckoned with on the world circuits. Go Canada Go! And it’s not all about competition, it’s also about discovering a sport that is so much fun and healthy to participate in. It changes one’s view about the winter from cold and depressing to “I just can’t wait until the snow falls”! The world is yours to discover and snowboarding is one of those activities that should be on everyone’s bucket list!

What’s the best part about being involved with the Shred Hookups program?
KUU is involved with grass roots programs like these to try to help new participants get into the sport! And into taking care of their equipment.  If more people are willing to try the sport and fall in love with the sport and ultimately tune/care for their gear the better it is for everyone, the retailers, the resorts, the businesses around the resorts, and of course, the manufacturers like us.

What KUU product, breakthrough or achievement makes you the most proud?
Having the history in the family of developing the World’s 1St Electric Waxing iron, being Canada’s first wax company, the breakthrough with our MACH series of waxes, and producing some the best snowboards ever. It really is a combination of all our achievements over the years that makes me most proud and keeps me going.  It’s hard to get to the top and even harder to remain there, everyone, keep your dreams alive!

What’s next for KUU?
We just started to film a new series of tuning videos. These segments will cover all the basics so anyone can learn how to get the most from their equipment whether they are a weekend warrior or athlete with World Cup aspirations.

Want to make a billion dollars? Figure out how to make snow at +5c and have it stick around and I’ll partner with you tomorrow! Haha.  Make sure to check out our website www.kuu.com to check out all of our quality waxes tools and accessories!

Join our Shred Hookups program today and get discounts on KUU Wax products and a number of other brands - exclusive to Canada Snowboard members.